We just learned something about Clueless that is making us question everything we’ve ever known and loved. After 21 years of watching Cher, Dionne, and Tai be hilarious together, we thought we knew the movie like the back of our hands. But as it turns out, we were wrong. We know nothing about everything.

As Marie Claire pointed out, in the scene where Cher shows her report card to her dad (whose mail reads “Melvin Hamilton” in this scene), the name printed on the paper is Cher Hamilton — obviously an entirely different last name than we originally thought. 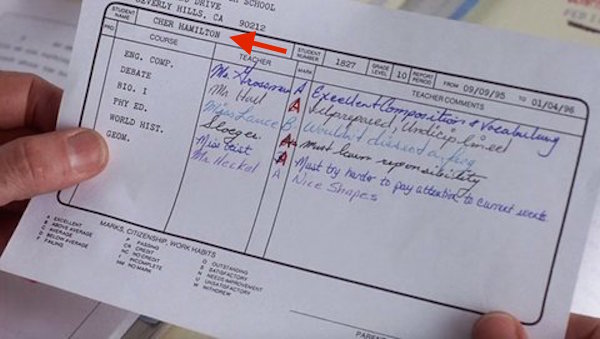 And here’s the scene:

Since it’s a little blurry, you can always pop in the DVD, which would probably make for a fun afternoon. Either way, how did this happen? Was it a complete goof on the part of production? Or is Cher’s given last name actually Hamilton, but she changed it to Horowitz for reasons unbeknownst to us?

Orrrr the entire thing may have been an inside joke.

"Cher's last name is given as Horowitz, but shown on her report card as Hamilton," according to IMDB. "This may be an in-joke, as director Amy Heckerling's previously directed Fast Times at Ridgemont High (1982) featured a character named Stacey Hamilton."

We’re going to believe that the report card was either a mistake/continuity error or a joke, because we don’t want to have to second guess everything we’ve ever believed to be correct about Clueless. We are too emotionally invested.