We finally known which clown is Evan Peters on “American Horror Story,” and it is hella disturbing

There are spoilers ahead for American Horror Story: Cult. Fair warning! Also: some super disturbing stuff.

It’s been speculated all along this season that Evan Peters’ Kai Anderson was one of the weird, satanical clowns in the titular cult of American Horror Story. Actually, we kinda guessed that before the season even started, as many of the promo images (remember those terrifying things?) seemed to suggest that there was way more to Kai than what we could see at the surface.

So…good news? We were right? IDK if there’s necessarily any good news for this situation, as Kai is a clown, and he’s the head clown, and he is specifically THIS clown: 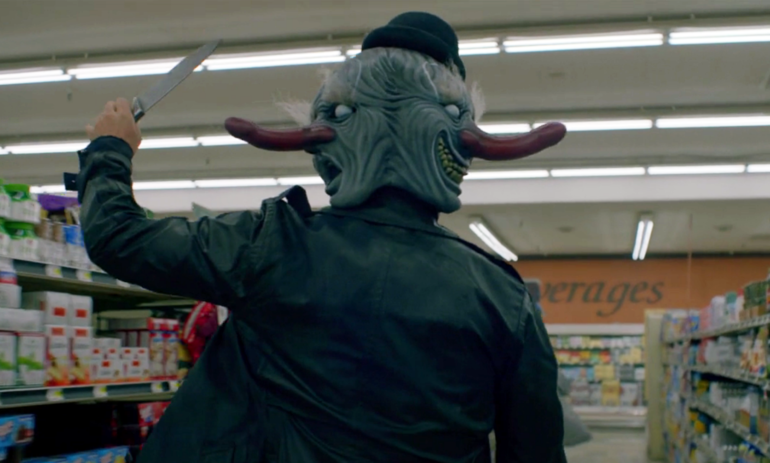 Enjoy having nightmares for the rest of your life!

Or, at least, we can assume he’s this nose-y clown, because at one point Kai takes off this mask and, you know, he’s underneath the triple noses. Doubtful that the members of the cult swap masks back and forth, because that’s not really sanitary, but honestly WHO KNOWS.

And yes, it turns out that many of the characters we’ve previously met this season — Winter, Meadow, Harrison, Beverly, even Ivy! — are all part of this cult, as we’ve seen Kai slowly start to “recruit” them over the last few episodes. This latest episode, “Holes,” brings them all together for the first time. The masks for all of them have completely come off, and for the first time we see what they’re trying to do in the town — create fear. It’s working.

Via a few flashbacks, we see these clowns commit some of the previous murders, most notably the one where they lock that couple into coffins. There’s a brief moment where the cult members discuss how long they’re going to be left inside, and Beverly is like, “Uh, forever?” Later, the group beats and murder Bob (from the news station), along with his gimp in the attic (??!!???!!!!?????) Well, that was 100% unnecessary, but okay. It’s honestly super weird, and later on even Ivy’s not sure if she can handle much more of this.

Same, Ivy, same. And we haven’t even discussed Kai’s tragic backstory involving his parents, but you know what, sometimes we can only handle so much clown mayhem for one night.