Many people first heard about Christian Siriano when he competed on—and won—the fourth season of Project Runway. That was 10 years ago, and since then the fashion designer has made a name for himself in so many other ways. In July, HelloGiggles met with Siriano in his new store in New York City to talk about inclusivity, sunglasses, and more. We also got the designer’s advice for how people can approach fashion in a more fun way, which is his greatest hope.

“I think there are no rules to wearing clothes; you can be anyone. We’re not curing cancer here, we’re playing. It’s like, we’re putting on a pretty dress, and I always think that is very important to remember,” Siriano said.

Probably the most notable story following Siriano’s Project Runway win came when Saturday Night Live star Leslie Jones tweeted about designers’ unwillingness to dress her for the Ghostbusters premiere in 2016. “It’s so funny how there are no designers wanting to help me with a premiere dress for movie. Hmmm that will change and I remember everything,” Jones tweeted. Siriano simply responded on Twitter with two hand-emoji waves, and he soon became her go-to designer.

Jones’s first tweet referred to the fact that many designers don’t want to make gowns for larger-sized women, and Siriano explained to HG that being inclusive has always come naturally to him.

“We’ve always been doing it, we’ve always had a very diverse customer, even from the very first season, so I was always doing it, it just happened so that one day I put it in everyone’s face a little more because people are very visual and need to see it for themselves," he said. "So when I decided to use girls on the runway that were maybe a little curvier, I think it changed people’s perception, which was great. We have been dressing women like that on the red carpet since day one, people like Whoopi [Goldberg] or Oprah, so it always was just important to celebrate beauty and cultures, we always have a really great mix of people from different backgrounds, that was always very important,

Siriano doesn’t only make one-of-a-kind gowns for A-list celebs like Jones, either. He told HG that all of his clothing comes in a wide range of sizes. “We make a dress and it can come in any size, so really that’s just like how we think about it,” he said. Considering that Racked recently reported that 68% women in the U.S. wear a size 14 or up, it really makes sense for designers to make their brands as size-inclusive as possible.

When asked about why other designers don’t share his mentality of any-size-available, he said, “That’s always a weird thing, and everyone has their reasoning and their thoughts, but my thing is just try to make people feel good about what they’re in.”

Siriano offered some great advice for how to feel good about trying new things and ignoring what you’ve heard about clothes that are “unflattering.”

“Try everything. If you were like, ‘Oh, strapless doesn’t look good on me,’ that doesn’t mean don’t ever try a strapless dress on,” he said. “I think that’s a big misconception. It’s the same with, ‘Oh, fitted jackets don’t look good on me.’ Just because you’ve tried on one and it didn’t look great and two or three, it doesn’t mean for all eternity. So I think it’s important to keep trying things, keep playing with it. Push yourself, try things you never would try, you just never know. I’ve found that it’s always the things that you think wouldn’t look great, look great.”

If you’re looking for a sign that you should try a halter top even if you once found one “unflattering,” consider this it.

Siriano practices what he preaches, too.

Siriano recently tried something new when he partnered with Transitions Optical to design his own sunglasses for the Christian Siriano x Transitions Collection.

“I think people get stuck in their ways and they get comfortable. And I think that’s always a challenge and it’s kind of why I do projects like this, like working with Transitions. I want to do fun, new, exciting things. I want to push myself,” Sirano said.

With every collection, Siriano makes sure his clothing can be worn for important moments.

“I think people remember what they’re wearing. You know, ‘I wore this great dress at my best friend’s graduation’ or whatever it is,” he said. “Clothes become iconic in their own way, so I hope that fashion just kind of continues that.” 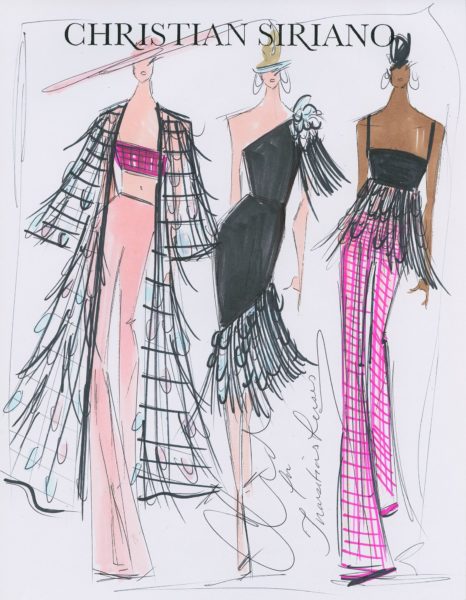 Siriano certainly will continue setting fashion trends and setting new standards for the fashion industry as it slowly becomes more inclusive. While Siriano is already thinking of his next collection, which he said will have “a very traveled kind of feel,” he also hopes to dress a certain celeb client for the red carpet. “I’m a big fan of Cate Blanchett and I haven’t done anything with her yet, and that would be fun. So maybe I’ll do something with her soon,” he said.

Then again, it really doesn’t matter who Siriano designs for because his gowns always seem to make the best-dressed lists. We wouldn’t have it any other way.