Chris Colfer’s next book is sort of inspired by “Glee” so it’s time to start Gleeking out!

Chris Colfer is a crazy-talented children’s author but his next book is definitely different from what his fans are used to. In fact, Colfer’s next book was partially inspired by Glee — and we can’t wait to read it.

The former Glee star has been a best-selling author since he wrote his first book in his children’s series, The Land of Stories, back in 2012. Colfer is now ready to branch out into the YA novel realm, but that doesn’t mean The Land of Stories doesn’t have one more book in the works as well.

On Sunday, Colfer attended EW's PopFest and talked all about his new book series, Stranger Than Fiction, which will be hitting selves in 2017, plus he dished about his next book in the Land of Stories series, so fans have a lot to get excited about.

Stranger Than Fiction, is geared towards young adults as it revolves around four kids after high school, who have a life-long obsession with one TV series.

"It's about these four friends and they decide to go on a road trip to spend the last few days they have together and really celebrate their friendship before they go off to school and as a joke they invite the actor from the television show [that they've all been obsessed with]," Colfer explained to Entertainment Weekly and the fans at the pop-culture festival.

“He shows up the next day ready to go on the road trip and he instantly is the world’s worst Mary Poppins. He gets them drunk, he gets them stoned, he’s using bad words.”

This upcoming tale is loosely inspired by the actor’s time on Glee, he admitted, but it’s definitely not an autobiography!

A book inspired by Colfer’s time as Kurt Hummel? Sign us up! 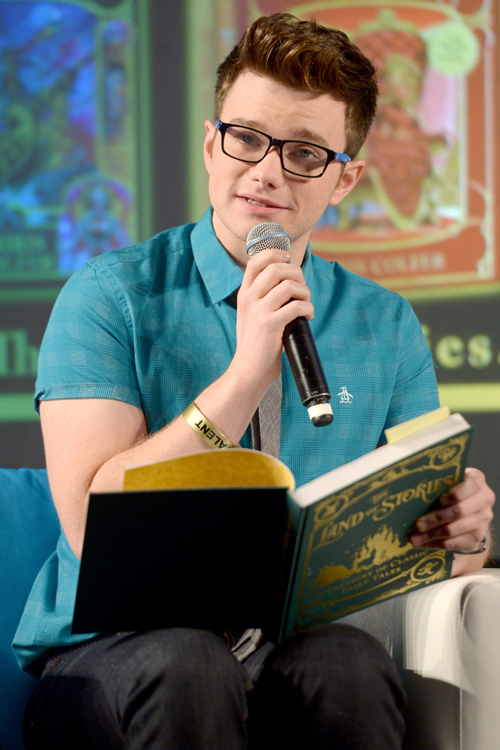 His Land of Stories series however, isn’t over just yet, and it continues to center on the fantasy world and the fairytales you grew up reading. Colfer revealed that he is currently thinking about what he wants to do next in the imaginative series and has begun planning the next installment’s title.

Colfer also talked about how he knew the sixth book would be the last for The Land of Stories series saying, "I almost don't know if I decide. I think it's like this creative alter ego deciding. I think books one through six tell a very good, complete story and I don't want to drag it on."

As for even more distant writing ventures, Colfer teased, "I'm sure there's a saucy adult novel in me somewhere."

Oh, Chris you are our bookworm hero!