April 10th, 2018 is Equal Pay Day this year, but conversations around the wage gap and equality often leave out many groups of women — including women with disabilities.

Equal Pay Day was established in 1996 by the National Committee on Pay Equity to highlight the gap between women’s and men’s wages. It’s honored on a Tuesday in early April to show how much farther into the year and into the work week women would need to labor just to earn as much as men do. Women still make 83% of what men make, according to 2015 Pew Research Center analysis. And it’s great that the conversation is increasingly happening around why women earn less and what actionable change needs to happen to close the existing wage gap, but that needs to include everyone.

Disabled women are frequently left out of mainstream conversations such as #MeToo and sexual violence, sex education, menstruation and reproductive rights, and even the Women’s March that took place around the country last year after the presidential inauguration.

And when we leave disabled women out of these conversations, we aren’t just doing a disservice to the disability community, we’re also centering women who already have the most privilege in our employment activism.

Women of color, non-binary people, LGBTQIA+ people, fat women, immigrants, and religious and cultural minorities all also have a wider wage gap and are frequently left behind in discussions surrounding employment equality. In order for social change to be effective, we need to accomplish equal wages and fair treatment for all these groups and more.

Last year, while I was reporting a story for a mainstream online magazine, I spoke with a few other women and non-binary writers about the payment they had been offered for reported stories of similar length and research. There was a significant discrepancy between a few of the other journalists’ payments and mine — and when I checked into their background, I saw that we had similar levels of experience, both with that particular publication and others. The only difference I could think of was that my editor knew about my disability because my pitch (and several of my past stories) were tied to disability rights. I have no way of knowing whether my instinct is correct — that I was offered less because I’m disabled and cover the disability beat — but I do know that disabled writers have been tokenized and exploited by publishers eager to seem more “woke.” 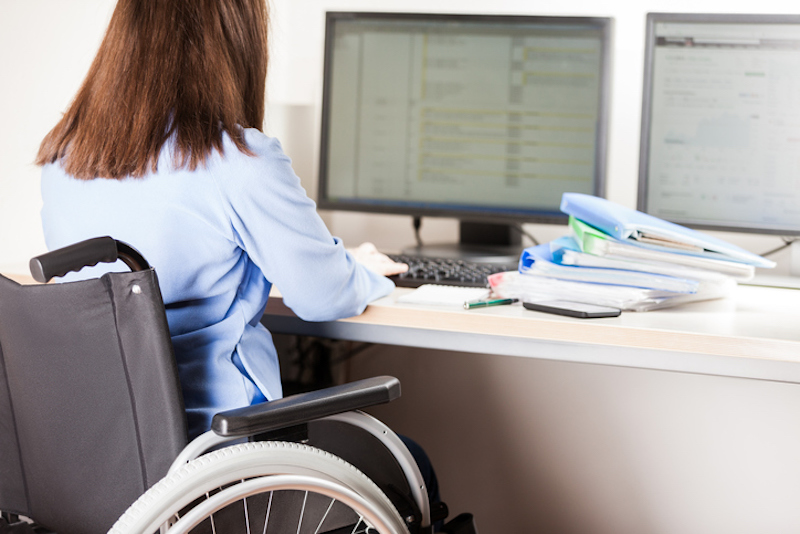 I decided to try out the app myself. I have a physical disability that is both activity-limiting and work-limiting (I need accommodations to do my job, like not being required to perform physical labor or stand on my feet for longer than a few minutes).

I learned that the wage gap between a non-disabled woman and me is 14 percent.

The gap increases to 18 percent if I specify that my impairment type is “legs or feet,” which is one of the only options on the dropdown menu that somewhat accurately reflects how my mobility is impacted by my genetic connective tissue disorder, Ehlers-Danlos syndrome.

It’s disheartening to know that employed women and non-binary people who share my disability are far more likely to be underpaid compared to men and non-disabled women — but it’s even more disheartening when rallies, marches, and legislative action don’t include us. It’s time that we do something to fix that.