Starting in February in West Virginia and spreading to Kentucky, Oklahoma, Colorado, Arizona, and most recently, North Carolina on May 16th, public school teachers all over the country are striking for better wages in “wildcat strikes” — or strikes organized by unionized workers but not authorized by union officials. So far, teachers in North Carolina, West Virginia, Arizona, and Colorado have won increased school funding and higher wages thanks to the strikes — but teachers from all of these states are continuing their protests because plenty more needs to be done. Here, a union organizer from United Teachers Los Angeles discusses the importance of this movement.

That’s what I thought to myself when I read news headline upon news headline about wildcat teacher strikes catching fire across the nation this year. Will West Virginia, Kentucky, Oklahoma, Arizona, Colorado, and North Carolina please stand up? Because the level to which teachers in these states are demanding dignity and respect is inspiring me to push my members to organize for and demand more funding, better raises, and better working conditions, stat.

Cami George, my coworker and a regional organizer for United Teachers Los Angeles, otherwise known as UTLA, agrees. Educators have been the ones running the game in our schools for years, and as we’ve seen in school districts across the country, the time for Los Angeles Unified School District (LAUSD) to recognize it is now:

“Every year, we push past the bureaucracy to meet the growing needs of our students. Our voices for real change are ignored and overlooked time and time again. With these strikes across our country, we are witnessing a time when there’s a demand to be heard!

As a union organizer for UTLA, the demand to be heard is what I try to inspire among educators who work for LAUSD, the second largest school district in America. 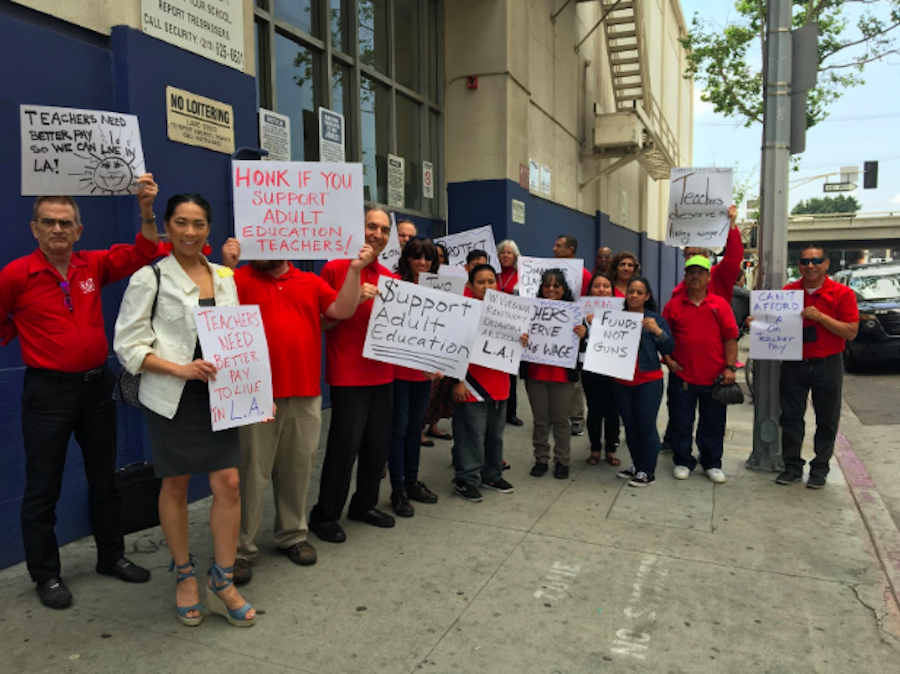 On a day-to-day basis, I organize unit members who qualify as “itinerants” — which is a fancy word for a person who “travel[s] from place to place” (thanks dictionary.com!). While the majority of UTLA members are teachers, many members qualify as itinerants and work in positions ranging from psychologists, to substitute teachers, to adult education teachers, to arts teachers, to nurses. Currently, as part of UTLA’s campaign for a better contract for our members, I work with itinerants to help them participate in escalating protest actions — which can potentially lead to a union-authorized strike, if necessary. However, because the nature of their work requires them to travel from school to school, establishing unity and camaraderie amongst coworkers may sometimes seem impossible, discouraging, and daunting.

But right now, those members are viewing obstacles as opportunities — thanks to the national teacher strikes.

Arlene Inouye, the secretary of UTLA, is an itinerant member with approximately 18 years of experience as a Spanish bilingual speech and language specialist in over 30 schools. She reflects on the momentum generated by the nationwide teacher strikes — specifically, its impact on women:

“The national movement inspires me and renews my hope in what is possible. It is a calling for women, who are 75% of education union membership, to rise up, take risks, and become leaders who will propel us forward in this educational movement."

As a union organizer, I’m responsible for moving people to action. That includes inspiring others to take risks, but taking risks is never easy — especially if those risks can cost you your livelihood.

The fact that educators are standing together, all at the same time, and remain willing to risk their livelihoods is a phenomenon that organizers in West Virginia, Kentucky, Oklahoma, Arizona, Colorado, and North Carolina worked to create.

Now, educators in Los Angeles can’t afford to dismiss the hype; we need to let UTLA members know what time it is. According to Cecily Myart-Cruz, Vice President for UTLA/NEA (National Education Association) and a teacher with 17 years of experience, it’s time to start living out Martin Luther King Jr.’s mantra: “Injustice anywhere is a threat to justice everywhere.”

“We can no longer sit idly by and not be the face of the movement for our students. Our working conditions are our students’ learning conditions, and if we don’t name what is going on from our vantage point, someone can co opt it. We must be the writers of our narrative.

In short, Cecily is telling educators in Los Angeles Unified what Beyoncé has been saying since her Lemonade album: Get in formation, teachers.