About two weeks ago, the Centers for Disease Control and Prevention (CDC) issued a recommendation directed toward young women who weren’t taking birth control, recommending that any women who “could get pregnant” should avoid imbibing alcohol unless they’re using contraception. “About half of all US pregnancies are unplanned and, even if planned, most women do not know they are pregnant until they are 4-6 weeks into the pregnancy,” the report read. “This means a woman might be drinking and exposing her developing baby to alcohol without knowing it.”

Essentially, the recommendation suggested that women who don’t take birth control should avoid drinking alcohol due to the risk of harming a hypothetical child in early pregnancy, and also released an infographic suggesting that drinking can lead to injuries, violence, sexually transmitted diseases, and unintended pregnancy. 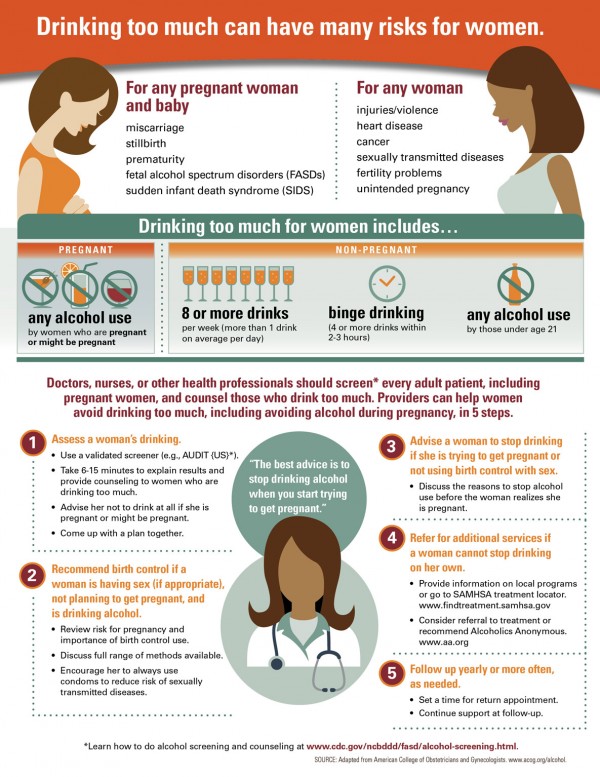 The CDC’s warning to women = a lot of backlash

The CDC’s logic is that approximately half of American pregnancies are unplanned, and that it’s common to be unaware of the pregnancy for the first month. However, there was certainly a lot of room for misinterpretation, and the report was met with a wave of backlash; The Washington Post called the report “incredibly condescending,” while Slate dubbed it “swath-yourself-in-bubble-wrap thinking.”

So what’s the real truth here? Many experts agree with the CDC’s assertion — although not all are on board with the delivery.

“The CDC is trying to reduce the number of babies with fetal alcohol syndrome, so their recommendations are understandable,” Dr. David Adamson, founder of ARC Fertility and a board-certified reproductive endocrinologist, told HelloGiggles, but he highlighted that it’s “unreasonable” for the CDC to believe it would work for all women’s lifestyles.

Yes, the advice is sound for women who are trying to get pregnant. But what about young women who aren’t planning on having children for years? What about women who don’t ever want children? The warning still applies, says Iffath Hoskins, MD and OBGYN at NYU Langone Medical Center. “Approximately 50% of all pregnancies are unplanned,” Hoskins told HG.

There is no “reliable info” about what is a “safe amount” of alcohol, nor a safe time in development where it won’t affect the baby’s brain or other structures — and every woman’s body is different in how it breaks down alcohol, which means the “wisest approach” is total avoidance of alcohol, Hoskins told us. “Even though a woman may initially think that she isn’t planning to have children, her opinion may change when she finds herself to be pregnant or at any other life situation,” she said.

To which the criticism still stands: Must every woman constantly be dedicating her life and choices to a hypothetical baby?

If there’s the mere possibility that a fetus exists, do all thoughts of bodily autonomy go out the window?According to Catherine Ruhl, CNM, MS, associate director of Women’s Health Programs for the Association of Women’s Health, Obstetric and Neonatal Nurses (AWHONN), the backlash wouldn’t be so strong if it were about anything other than alcohol. “If the substance in question wasn’t alcohol but was a commonly used over the counter medication, would there be the same reaction to messaging about the potential for fetal effects?” she told us. “I suspect there might not be. It might be viewed as something important to know.”

Was the CDC’s warning sexist?

However, Ruhl acknowledged that the infographic could be “perceived as confusing” as there was “a lot of information” delivered — and that the dangers of drinking related to various issues can also apply to men, too.

To wit, one of the largest criticisms of the CDC report has been the way it seems to shift the blame and pressures onto women — the exact reason why designer Chris Giganti decided to repurpose the infographic into a parody warning for alcohol and “violent men.”

“[T]he association between excessive alcohol use and the risk of injury, violence, cancer, and even unintended pregnancy are all true, because alcohol can alter one’s ability to be 100% cognizant and can potentially lead to high risk behavior, including unprotected intercourse,” OBGYN physician Gayatri Chhatre, MD told us. “However, I think it is very important to remember that this is true for both men and women, and that these recommendations by the CDC apply to everyone.”

Meanwhile, the CDC is sticking to their guns, although acknowledged that the report “may not have been as clear and concise as we intended” which “led to a degree of misinterpretation.” “CDC’s intention was to explain the risk of drinking before a woman knows she is pregnant, and to show that the harmful effects of alcohol on a developing baby were completely preventable — not to prescribe a lifestyle or suggest women plan their entire lives around a hypothetical baby,” Dr. Lela McKnight-Eily, epidemiologist with CDC’s National Center on Birth Defects and Developmental Disabilities, told HG.

Later on, the CDC removed women and men from the infographic completely. Here’s what is currently available on the CDC’s website: 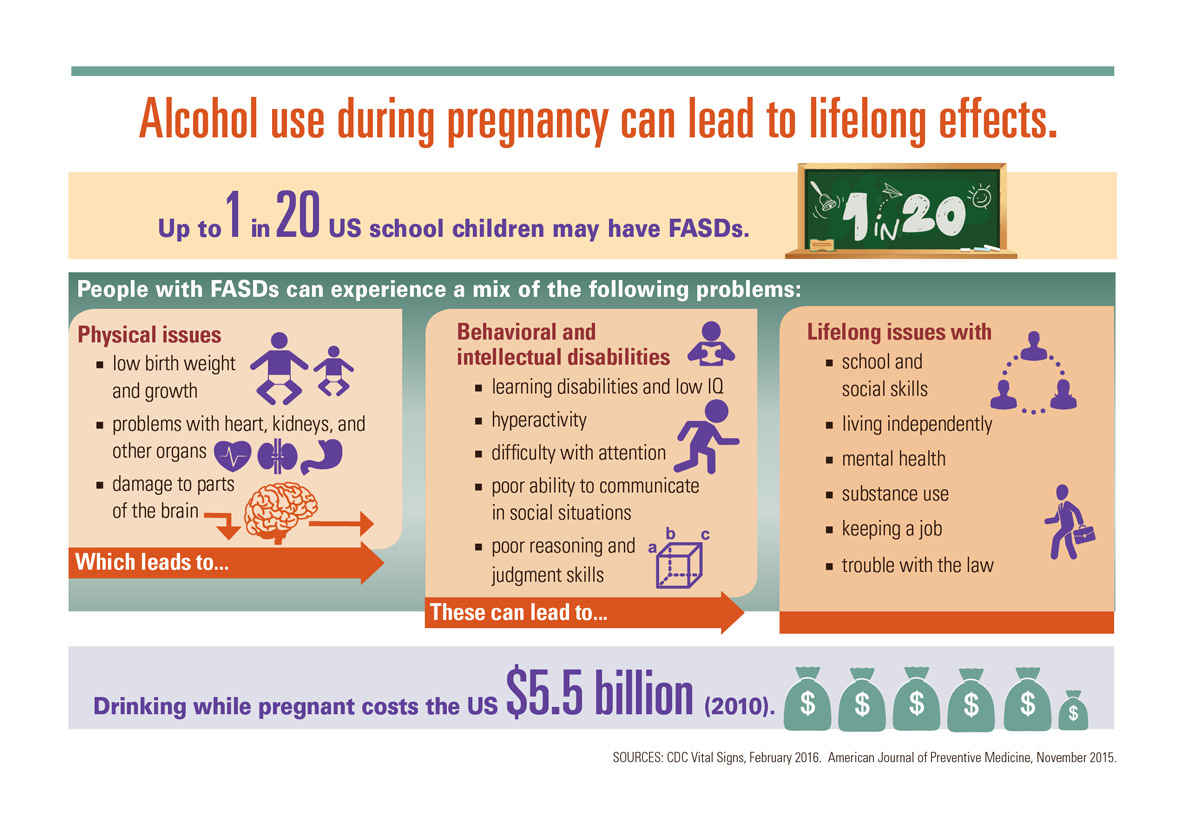 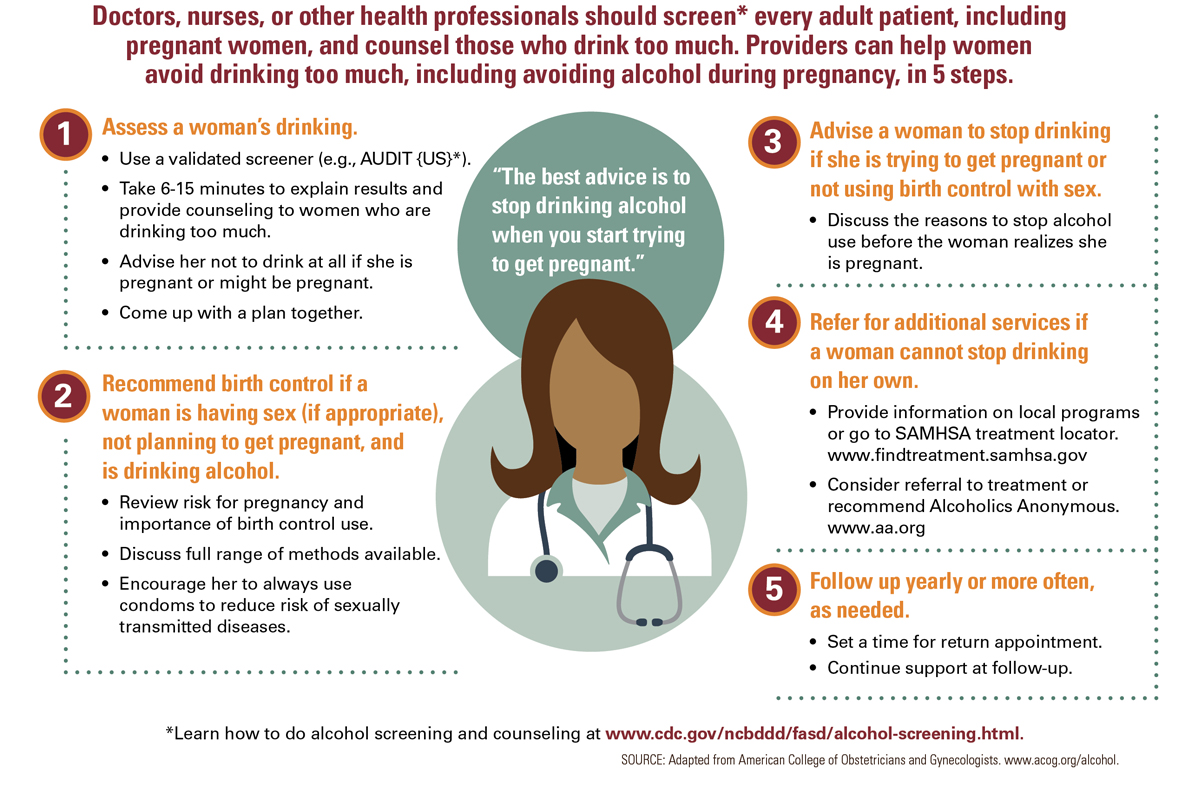 The problem is that women who DO want to get pregnant continue to consume alcohol —which is problematic.

According to McKnight-Eily, three out of four women who say they want to get pregnant ASAP keep drinking alcohol. “We also know that drinking alcohol during any stage of pregnancy can have many risks for women and their babies. . . but are 100% preventable,” she said.

Thus, the warning was intended for women “who are pregnant or trying to get pregnant,” McKnight-Eily said — and a means to encourage women who don’t want to get pregnant to talk to their doctors about contraceptives. “This report is about empowering women to make healthy choices, for themselves and for their baby if pregnant or planning a pregnancy,” McKnight-Eily said. “We strive to give the best information we can so woman can decide what is best for themselves at the stage in life they are at.”

In a nutshell: Yes, most experts believe that it’s important to avoid alcohol during a pregnancy and while trying to get pregnant.

However, while expensing information about a woman’s body, it’s essential to keep bodily autonomy at the forefront of the conversation — and not as an afterthought post-backlash.

“Fortunately, we live in a country that prizes individuality and self-determination,” Adamson told HG. “. . . The CDC is trying to point out that there are risks to a particular activity, and that women need to be aware of these risks when making decisions about how they want to live their lives. . . So if the goal is to inform women better so that they can exercise their reproductive autonomy with a better outcome for them and their babies, this information will have been very useful.”