Batter up… hear that call… the time has come… for the cast of A League of Their Own to reunite for a softball game, and for all of us to live vicariously through their ongoing bond.

For them AND for us. It’s so cool to see the cast reunited after so many years. It’s even cooler to know they’re all still badass ball players. Once a Rockford Peach, always a Rockford Peach.

Davis co-founded the Bentonville Film Festival in 2015, and their mission is to “champion women and diverse voices in media,” according to the website.

“This event was so popular last year that we decided to do it again,” Davis said. “And I’m so thrilled to have six of my Rockford Peaches castmates attending the game this year.” 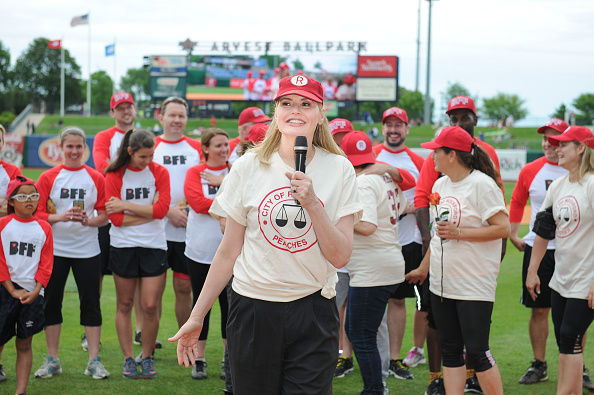 Davis managed the blue team who played against the red team. The blue team‚ who happened to have former Arkansas Razorbacks running back Peyton Hillis and former professional soccer player Cobi Jones — no biggie — won 20-4, according to Arkansas Online. false

After the game, Davis thanked fans for their hospitality during the six day festival.

“We’ve had the best time,” she said. “Everybody loves Bentonville. Obviously we’ll be back again next year. And it’s all because of your incredible support.”

That should give other castmates plenty of time to clear their schedules, right? (We’re looking at you, Mo, Ro and Lo).