We’ve never seen Cara Delevingne NOT look amazing, considering she’s a supermodel and whatnot. But she rocked her style extra hard over the weekend at Comic-Con, and we’re obsessing over her look.

Delevingne is currently promoting her role as Enchantress in the highly anticipated Suicide Squad, so of course she had to sport some seriously hot looks.

Her hair and makeup were on point, and now we know exactly how.

Delevingne’s makeup artist Molly Stern gave Teen Vogue a step-by-step explanation of the red carpet prep. Stern explained that her goal was for Cara to look feminine but slightly edgy, and she definitely succeeded.

To start, she prepped Delevingne’s skin with with no less than three moisturizers and serums. Dewy is good, people!!

“Next I applied Rimmel London BB Cream Matte in Medium to give her a sheer glow,” Stern said. “I softly contoured her cheeks and then flushed her apples using the Rimmel London Sculpting and Highlighting Kit by Kate Moss in Golden Bronze.”

To make her eyes look as amazing as they did, Stern applied an iridescent pink eyeshadow with electric blue liner, softening and smoking out the look with soft taupe on her lower lash lines. 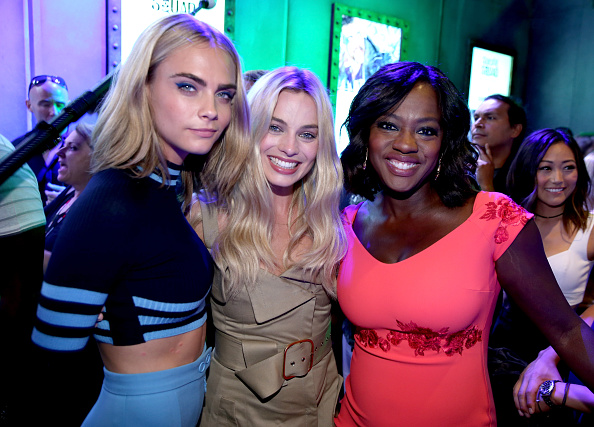 As for Cara Delevingne’s signature brows?

Stern explained that trying new makeup on the actress is fun, because Delevingne is always into trying new things.

And the most burning question — how does her makeup stay fresh when she’s all over the place and it’s SO hot outside?

“…Generally for a long day, ‘less is more’ always makes a huge difference. If you let your skin breath a bit, by keeping it sheer, touching up makes more sense and doesn’t build up and end up looking like cake batter on the skin.”

Ah, cake batter. We’ve all been there.