On the afternoon of February 14th, 2018, my 12-year-old son was withdrawn, anxious, and sad when he arrived home from school. This is far from a normal occurrence. Yes, he is on the cusp of those dreadful teenage mood swings, but they haven’t started yet. He is still talkative, affectionate, and engaging. I can feel the beat of his heart, even still, as if it’s my own, so I knew instinctively that his mood had nothing to do with a bad grade or an issue with friendships. I gave him space to unwind because I knew he would share his emotions when he was ready.

Valentine’s Day is a day when I get to smother him with hugs and kisses and he looks forward to eating his favorite dinner prepared with a mother’s love. Given his mood, I was uncertain how the dinner would go. Then he sat down and asked me if we could move to Europe, specifically Barcelona.

He said, “The kids in Barcelona don’t bring machine guns to school and kill their classmates.

To put yesterday’s conversation in context, we live in Florida, and my son’s school is only twenty miles south of Marjory Stoneman Douglas High School, where 17 people were murdered by mass shooter Nikolas Cruz. 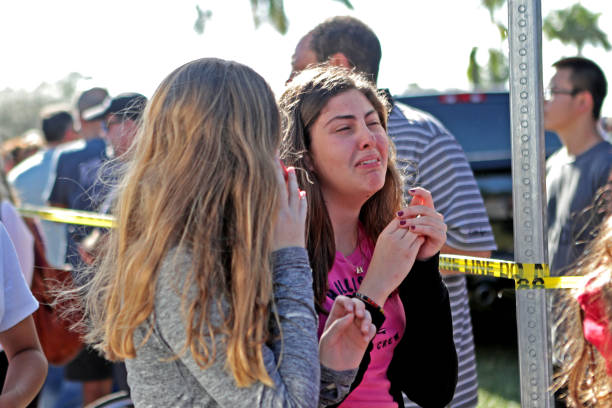 My son continued to share the traumatizing hours that his sixth grade class endured. The school went into “code brown” when news of the active shooter surfaced. Code brown is when the teacher locks the classroom door from the inside, closes the blinds, puts a magnetic board over the window of the bullet proof door, and the children rush to the back corner of the classroom where they sit in silence behind the desks.

Absorb this for a moment. There is nothing normal about what I just shared — except that, now, it is considered normal in the United States.

According to various news reports, across the United States there have been eighteen school shootings in 2018. It’s only mid-February, folks. This is frightening. We are living with an insidious epidemic that has permeated our most precious concerns — our children.

My son was six years old when a deranged gunman used an assault rifle to murder 20 first graders at Sandy Hook Elementary School in Newtown, Connecticut. I remember picking him up from his first grade classroom that day, panicked yet grateful that I was able to bring him home, safely. He slept in my bed that evening, and I snuggled with him while sobbing silently. I never appreciated feeling his chest rise and fall the way I did the evening of December 14th, 2012.

The data shows that since Sandy Hook, there have been at least 239 school shootings.

Given those statistics, what am I supposed to tell my son when he asks to move to a new country? I can’t lie and tell him that he is safe.

The truth is he has every reason to be fearful, worried, and traumatized. The murders yesterday hit so close to home — both in proximity and in actions. No parent should have to identify the bodies of their children murdered on school grounds. Sadly, we are living in a time when we don’t know whose child is next. false

As my son continued sharing his thoughts and feelings about the mass shooting, it was difficult to hold back my tears. I wanted to be strong and stoic, but I’m vulnerable and worried. Living in a country where gun reform discussions go nowhere has taken a toll on all of us. Congressional inaction on both sides of the aisle has left us in an abyss of carnage. Legislation needs to be enacted to protect all of our children.

We simply want our children to live long enough to become the leaders who will one day have the courage to implement changes that save lives.