Busy Philipps wants women to feel pride, not shame, about their bodies—and it starts with her own daughters

Don’t call Busy Philipps‘ daughters pretty. Listen, she gets it—it’s a common, habitual thing people say when they meet young girls—but don’t expect the actress to just let it slide. Philipps, who has become a candid voice on social media and a known advocate for women’s and reproductive rights, remembers correcting people every time someone complimented her oldest daughter Birdie’s looks. “I would always immediately say, ‘Thank you, she’s very smart and super funny and a weirdo, too.’ I would try to come up with another way to offset someone complimenting her on her pretty little face,” Philipps tells HelloGiggles.

She wasn’t trying to be rude, she explains, but she knew that those seemingly harmless comments can have an effect over time, teaching girls that their appearance takes value over everything else. And Philipps has long wanted to shift that narrative. To do so, she’s had to confront her own internalized misogyny and watch the way she talks around her daughters, too.

“I think really critically about the messages that I want my kids to take away and [I think,] Would I want them to ever think or say the kinds of things that maybe I would be thinking or saying about myself?,” Philipps explains.

“And if the answer is no,” she continues, “then I know I need to start to rethink how I’m treating myself.”

For that reason, Philipps worked to eliminate negative self-talk “a long, long time ago.” She also says she developed a heightened awareness around the cultural perceptions of women’s’ bodies and body image by being around other moms. At summer birthday parties for her kids and their friends (settings that seem innocent by nature), she noticed how often body comments were normalized as standard poolside chatter. “No mom should be saying like, ‘Oh, I can’t get in a bathing suit. I never wear a two-piece,’” Philipps says.

But even with so much conversation constantly surrounding women’s bodies, a lot of important things are still left out—like basic information about the ways our bodies function and an array of common “down there” experiences. That’s why Philipps partnered with Poise on the campaign “It Takes Poise” to help deliver some much-needed real talk about women’s health. At the center of the agenda? Bladder leakage. 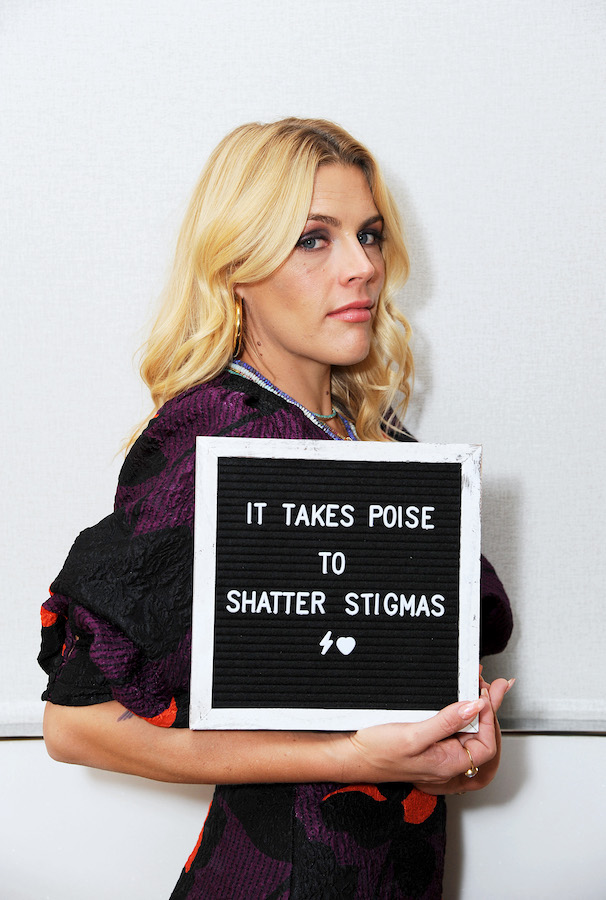 “Before I had my second kid, I really thought that bladder leakage for a woman was something that happened when you’re a grandma, because no one talked about it,” Philipps explains.

When she got pregnant with Birdie in 2007 (her second daughter, Cricket, was born in 2013), Philipps remembers only hearing people talk about how the pelvic floor can weaken during pregnancy, but not any of the common side effects of giving birth. Here’s what no one was saying back then (and is still rarely said now): 1 in 3 women experience bladder leakage for a number of reasons (childbirth being one of them), according to Poise, and it’s totally normal.

To help normalize and demystify the issue of bladder leakage, Poise’s ads are using yellow liquid to more realistically represent urine, rather than the typical blue. (On that note, if your urine ever comes out as a bright, crystal blue, please go see a doctor.)

Philipps’ no-bullshit approach to discussing issues regarding women’s bodies and overall health made her a clear choice for the brand’s campaign. After all, whether she’s talking to her two million+ Instagram followers about postpartum body insecurity, the stigma around abortion, or something else, “It’s all the same conversation,” she says.

“There’s no reason why we should feel shame for any of our health and for simply existing with a different set of DNA than our male counterparts,” Philipps continues. “And obviously [shame] is culturally a thing that’s been going on for a very long time, that’s been perpetrated on us, but I do believe that we have the ability to reframe the narrative in continuing to talk about it, continuing to insist on equality.”

The star notes that she’ll keep using her platform to talk about these issues “until we get to a point where it’s no longer necessary.” But women’s health shouldn’t be reduced to solely a women’s conversation, she adds.

“Having men fundamentally understand our experience will only empower everyone and will help us to be able to continue our fight for equality and parity, and all of the things that we are desperately asking for and have been for literally eons,” says Philipps.

Part of the reason she fights so hard to shift the conversation for her daughters and younger generations of women is because she believes in their ability to make some serious change. “There’s an ease to which I see these kids move through the world and take on all of the things that are affecting us, the big issues where they’re like, ‘We got this, we’re going to get this,’” Philipps says.

With so many young voices pushing for cultural shifts in the way we talk about women’s bodies, and campaigns like “It Takes Poise” doing work to destigmatize common experiences of women everywhere, the actress and activist has hope for the future.

“We just have to keep moving forward, keep pushing, keep having conversations,” she says.