I’d been dating my boyfriend, let’s call him Jordan, for almost two years when we decided to move in together. The situation was unique: Jordan was staying in London for five months to study law and, since I’d just finished grad school and was itching for adventure, he invited me to come along. It seemed like the perfect situation to test the waters of living together, and I’m really glad we gave it a shot.

Because it turns out living with your boyfriend is a lot harder than I anticipated.

Even after pooling our money together, Jordan and I could only afford to rent one room for the two of us: a living room in an already fully-occupied flat. Whatever, we’re in our twenties; that’s how it goes. I prepared myself for us to “get sick of each other,” but I didn’t really know what that meant. I assumed it would entail some light bickering, rolling of eyes, and a night or two of alone time. I thought we would continue the relationship we already had, just in closer quarters.

Instead, our relationship completely changed. It adapted to the new space, our new life, and became something totally new and different. When living apart, Jordan and I were truly dating. We’d see each other two or three times a week, considering ourselves lucky if we got to hang out more than that. Usually, we’d have a plan for our night together and there would be a sparkle of specialness about the whole thing: I’d put on lipstick or a dress I knew he liked, and we’d go out to eat or buy food to make together. And, yes, there were definitely days where the dress and the lipstick and the Trader Joe’s hors d’oeuvres were replaced with dingy sweatpants, morning breath, and pb&j’s, but the spaces between our dates, the hours away from each other were a huge part of our courtship. We had time to miss each other.Living together meant no mystery. Jordan saw all the things I usually did by myself in the privacy of my apartment: binge-watching Pretty Little Liars, taking unnecessary naps, and crying for no reason. These comforts were changed by the fact that there was now a witness besides my cat. Even though Jordan never gave me any reason to, I felt guilty when he was around my laziness. To make up for it, I tried to do most of the grocery shopping and cooking. I felt double-guilty when the chores stressed me out. Eventually, I talked to Jordan about it and we compromised: Most days, I cooked and he cleaned.

The word “compromise” came up in so many of the articles I read when I moved in with Jordan, but the kind of compromise the writers were talking about referred to the TV remote or who gets first dibs on the shower. Jordan and I rarely had any problems with those kind of compromises; in terms of stuff, we’re both pretty easy-going. Instead, we had to compromise when it came to emotions. For instance, I realized something really important about myself: I wake up in a bad mood. Everyday. No matter what, the sun rises to find me on the wrong side of the bed. Once I get moving and thinking happy (caffeinated) thoughts, my day is all uphill from there. 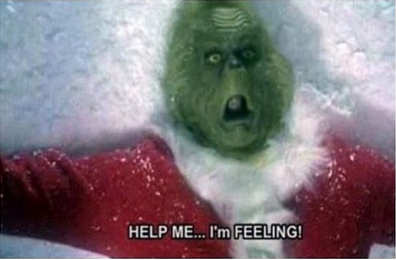 Poor Jordan! We quickly realized that he has terrible bad mood immunity. While I woke up like the Grinch, but cheered up within the hour, Jordan caught my grumpiness and it followed him around all day like a thundercloud. We were both embarrassed. Why couldn’t I wake up happy? Why couldn’t he just ignore me? Thus, the compromising began. On a normal morning, we barely spoke to each other. Sometimes, I let Jordan get ready before I ventured out of bed. It wasn’t ideal, but we were trying to protect each other… from each other.By the time we were making plans to return to home to Los Angeles, Jordan and I agreed to go back to living separately. We communicated really consistently over those five months abroad, so there were no surprises or hurt feelings. At first, I worried we were giving up on a new phase of our relationship, that we were taking a step back. However, I’m pleased to report our decision brought us closer than ever.

It’s been six months since I un-moved in with my boyfriend. We are lucky enough to see each other a few times a week, and I still get giddy when I see his toothbrush in my medicine cabinet. When I tell people that we aren’t living together anymore, they assume the worst. “I’m so sorry you didn’t make it,” they say. “You guys just weren’t ready.”

Well, that’s half true. Our relationship is going strong, but we weren’t ready to live together. While we’re sure of our feelings for each other, our lives are full of uncertainty — about passing the bar (him) and season 6 of Pretty Little Liars (me). Hopefully, by the time we un-un-move in together, we will be “on our feet,” as they say, with more established careers and enough money for more than one room to share.

I’m so thankful for the time Jordan and I spent living together in London. I learned about him, I learned about myself, and I was reminded that it’s TOTALLY OK to try something—even if you aren’t sure you’re ready to fully commit to it—as long as you’re honest with yourself and your significant other. Moving in together was the right thing to do at the time, but un-moving in together was also the right thing to do. Living together with no casualties is hard work! For now, it’s so much better to just enjoy ourselves, go on dates, feast on those Trader Joe’s frozen stuffed mushrooms.

Names have been changed to protect the innocent.

(Images via here, here, and here.)