Twitter thinks Blue Ivy’s dress might have a hidden message to Adele on it, and they may be right

After Adele gave a shout out to Beyoncé, fans think the favor is being returned. According to Twitter’s observations, Blue Ivy’s dress might have a hidden message to Adele, and it makes sense.

At the 2017 Grammy Awards, Adele took home most of the main categories, but she never stopped gushing about Beyoncé. After winning both Artist of the Year and Album of the Year, it was clear that Adele is one of Beyoncé’s biggest fans.

In fact, during her speech, she pretty much gave the Album of the Year award to Beyoncé for Lemonade.

The British singer also rocked a lemon broach on her green dress as a nod to the iconic singer. Now, fans think the “Formation” singer is returning the favor…in the form of her daughter’s wardrobe.

Now, fans think the “Formation” singer is returning the favor…in the form of her daughter’s wardrobe.

When Beyoncé and her family attended the Beauty and the Beast premiere, all eyes were on the mother-daughter duo. 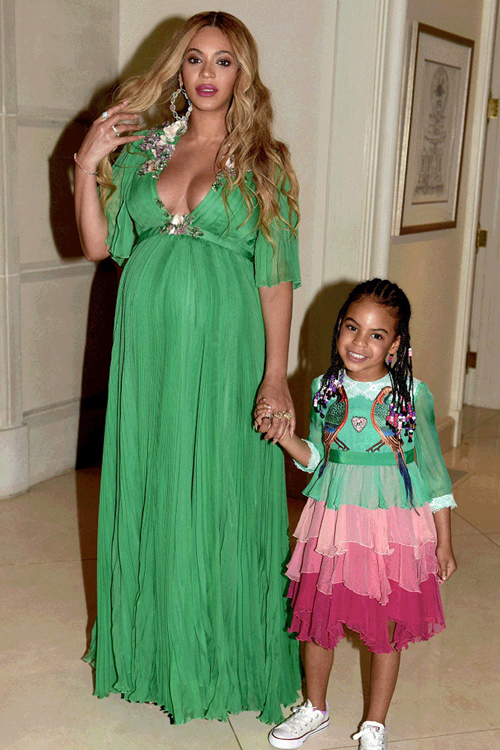 Beyoncé donned a gorgeous green dress, while her mini-me sported a pink and green frock.

What you might’ve missed is that on Blue Ivy’s dress there is a heart with “25” written in the middle of it.

Since 25 is the name of Adele’s album, it does seem like this could be a shoutout to the British singer. false false

Clearly, the love is mutual between the two fabulous singers, and we’re all for it.

While the number on Blue’s dress is super cute and could be about Adele, one fan came up with a different explanation.

“I actually think, since Blue Ivy is wearing a Gucci dress, that the number ’25’ is related to Alessandro Michele (Gucci’s creative director). His Instagram is @lallo25,” one fan wrote on Refinery 29’s article.

The five-year-old child was in fact wearing Gucci to the event, so this could just be a logo on the design. Then again, it is green, like Adele’s Grammy dress, so we can see it both ways.

What do you think it means? Is it for Adele, or is it for the Gucci creative director?