I’m known for being pretty vocal during times like this. Usually, I’m filled with anger and rage, ready to read for filth every blatantly racist commenter, tweeter or overall internet troll that I come across. But today, I’m bogged down by sadness and pain — I have no energy to engage with ignorance.

I woke up the morning of July 6th watching Alton Sterling‘s last moments. Not intentionally. I’ve successfully avoided videos like this before, letting news write-ups and #BlackTwitter paint the pictures for me. This day was different. This day, I felt a different type of emotion. This day, I experienced authentic empathy.

Like Sterling, I’m a parent. And like Sterling, I have to go to work to support my family. However, unlike Sterling, I work in a really nice corporate building in Los Angeles, C.A. And unlike Sterling, my physical appearance isn’t as threatening to society — being a light-skinned black woman is more accepted than being a dark-skinned black man. This morning, Jace, my happy 3-year-old son, came out of the bedroom to give me morning kisses. “Please don’t go to work, mama,” he says. “You have to read me a story.”

Now, most mornings, I brush this bit of cuteness off and tell him that I’ll read him a book when I come home. But again, this day was different. I had just watched a father take his last breath in front of his workplace. I wondered how Sterling started his day on July 5th. Was he greeted with morning kisses from his children? Did his children ask him to read a story before he left? And if they did, did he meet them with the same excuse that I would usually give my son? “Later.”

I thought about how I usually leave the house in a mad dash to make it to the office on time — never once thinking that this could be my last time saying “goodbye” to my family. I wondered if Sterling knew that this was going to be his last time. I felt for his 15-year-old son screaming and crying “I just want my daddy” in front of news cameras. The same way my 3-year-old does when he misses me.

But, as we know now, this wasn’t the only black life that was senselessly claimed in the span of 24 hours. I saw Philando Castile take his last breaths while on my lunch break. Right there, in the palm of my hand, I watched how Diamond Reynolds bravely recounted her boyfriend’s murder for Facebook Live. Diamond’s young daughter witnessed everything from the backseat of the car. She saw her mom’s boyfriend get shot not once, not twice, but five times. She saw the police man (with his pistol still aimed at Castile and Reynolds) yell “Fuck” twice; she saw her mother being harassed, commanded to get on her knees, and taken away in handcuffs. As though she were a criminal. 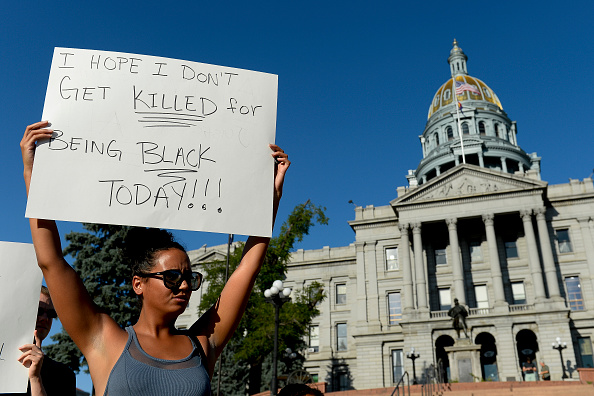 I planned on using today to decompress, removing myself from the internet. Trying to gather the facts of each case was no longer important to me. We all know what the common denominator in each case is. Being black in America is the biggest offense — not selling CDs or being guilty of a broken taillight. And you’re lying to yourself if you speak otherwise. As of right now, there is no amount of respectable politics that can protect black men from being murdered by the hands of the law.  You can save all of your “well if he would’ve’s” and “he shouldn’t have been’s” for someone who’s less educated about racism in America. Because the way we see it, breathing is even a punishable crime for a black man if caught by the wrong white man with a gun. For black men in this country, grabbing snacks from your neighborhood’s corner store, selling loosies, listening to music in a parking lot, and playing with a toy gun in a park can be death sentences.

I think about Jace and how his cuteness stops women in their tracks wherever we go. I think about how he feels so comfortable around police officers and firemen, because at his young age he believes that they’re supposed to “get the bad guys.”When is the right time to tell him that the very public servants he admires will make more of an effort to protect everyone, except those who look like him?

It saddens me when I think of his innocence being tainted one day. You see, because his black, boyish frame will inevitably grow into a black man’s stature. And I fear that stature will instill fear into the very women that once found him to be “cute” and the police officers that once saw him as “harmless.” One sudden move can quickly turn a routine traffic stop into a crime scene. Wearing sweatpants and a hoodie will turn him into a “thug” to passers-by. Black men in America are not exactly “free,” and if things continue along this path, Jace will have to walk on eggshells for the rest of his life. He won’t be able to make those “stupid teenage mistakes” with ease. I’ll have to teach him that people who look like him aren’t afforded the same justices and liberties as everyone else. And that is crushing.

I pray to God that my son, nor any of his classmates become a hashtag. I pray that Jace can grow up with true freedom, that he can be the most unapologetically black kid he could possibly be. I pray that all of the lives lost at the hands of racist murderers aren’t in vain, and that the glass ceiling placed on black rights will finally be shattered.

May Mr. Philando Castile and Mr. Alton Sterling rest in the sweetest of peace there is.