Trolls attacked the model who breastfed on the runway, and her best friend posted this epic response

On July 15th, Mara Martin made headlines after appearing in the Sports Illustrated Swim Search fashion show at Miami’s Swim Week. Martin, one of the 16 diverse finalists selected by Sports Illustrated to appear in the show, breastfed her five-month-old daughter while strutting down the runway. Although Martin received a ton of love from fellow moms and fans alike, unfortunately, internet trolls can’t be stopped. So Martin’s friend stepped in to shut them down.

Samantha Montroy Purcell took to the comments section of Facebook to clear up any rumors that her BFF was “seeking attention” by breastfeeding. According to VT.co, Purcell addressed the haters head-on:

"To the people with negative comments: Mara is my best friend in real life. She spent 12 hours during the casting IN HEELS holding her 20 pound baby during each day of the elimination process. The crew loved her baby and had even suggested she do one of her walks with her during the show."

Purcell continued, “When it came time to walk, right before the show started, the baby was nursing. The editor suggested she just go for it and take the baby with her. It wasn’t planned; she actually texted me freaking out right afterwards to tell me what had happened. There is nothing wrong with it. The baby was hungry. End of story.”

She then went on to defend not only Martin, but Sports Illustrated’s decision to include mothers in their campaign.

“Is it “necessary” to have a woman with a prosthetic leg on the runway? No, but they did it, and that was beautiful too. The whole point of SI doing an open casting was to celebrate all types of women, including moms. And they made it clear where they stand: that moms should be able to feed [their] babies WHENEVER, WHEREVER, and HOWEVER they want to, without taking crap from a bunch of busybody keyboard warriors with nothing better to do than trash someone they know nothing about. Mara is an amazing mother, woman, and friend. She deserves nothing but support. #feedthebabies #normalizebreastfeeding” 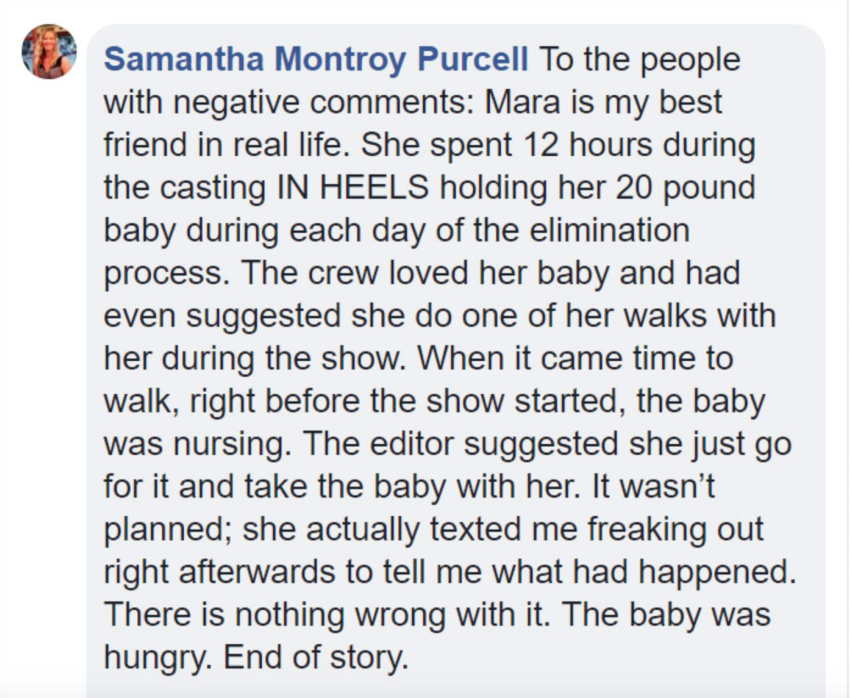 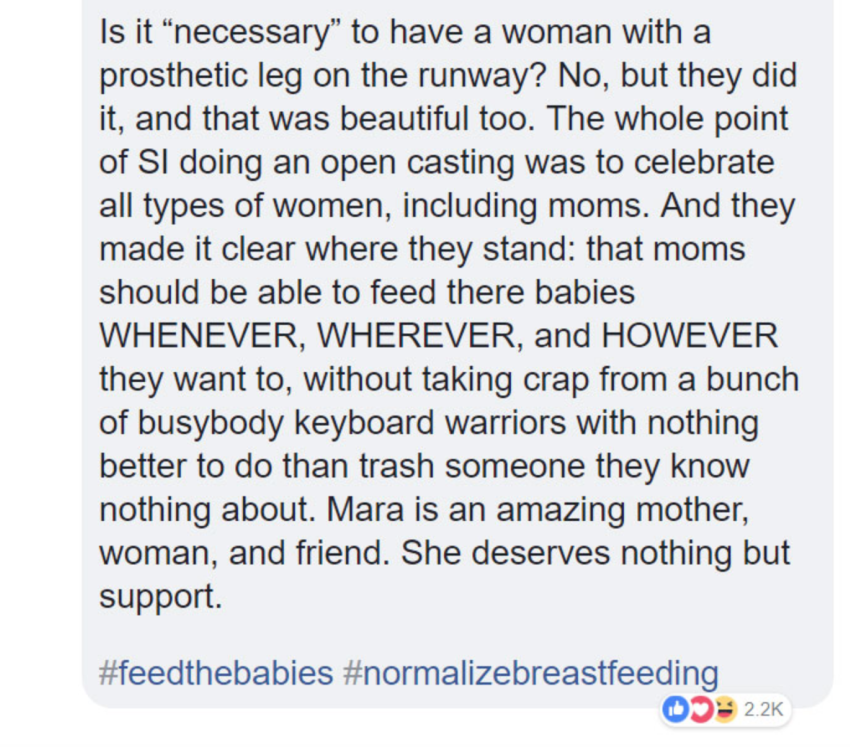 In a July 16th Instagram post, Martin shared a similar opinion, stating that although she appreciates the support she’s received since walking down the runway, she wishes this kind of thing wasn’t headline-worthy. She noted that the other women she walked with were just as deserving of the spotlight.