The 8 best-dressed stars at the 2019 MTV VMAs, in our humble opinion

On August 26th, the 2019 MTV Video Music Awards took place at the Prudential Center in Newark, New Jersey. As always, the show was basically a giant party that we wished we had received an invite to. We all bopped to Taylor Swift‘s first live performance of “Lover.” Lizzo took us to church to remind us to worship ourselves first and foremost. Missy Elliot accepted the Video Vanguard Award, and Megan Thee Stallion proved that Hot Girl Summer is still in full effect.

All this, plus the fashion was on point.

We thumbed through the VMAs red carpet pics to choose our favorite looks from last night’s event, celebrating those that really took risks and had fun with it. And we’re warning you now: You might want to grab your sunnies because there is a lot of sequin action happening below.

Prepare to be blinded by the light—in the best way possible, of course. Looking at your Lil Nas X and Lizzo. 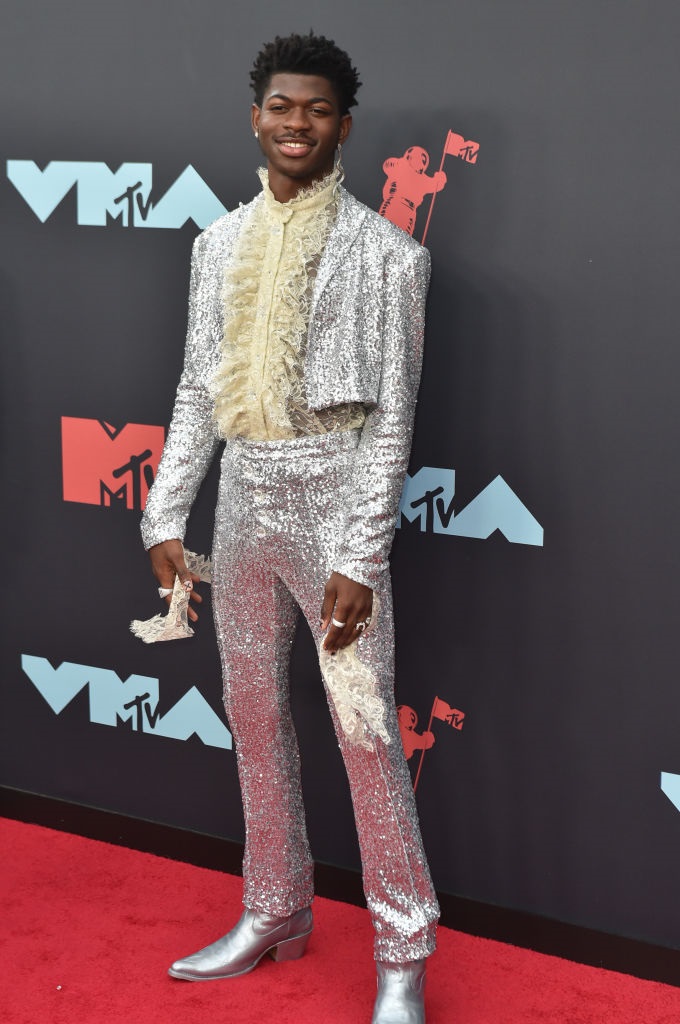 Lil Nas X, who took home the Song of the Year VMA for “Old Town Road (Remix),” featuring Billy Ray Cyrus, is the first man to wear Christian Cowan. Cowan worked with Lil Nas X to design a custom silver suit and lace shirt (with matching handkerchief, no less) inspired by none other than Prince. And we stan Lil Prince X. We stan hard. 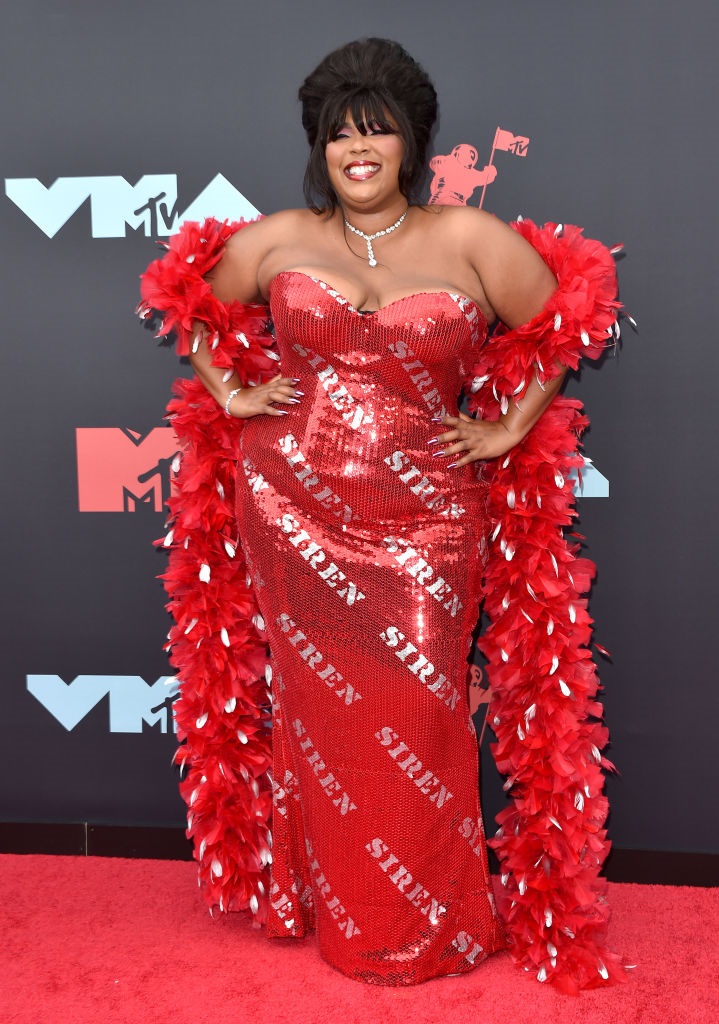 Lizzo isn’t bad, she’s just drawn that way. The “Truth Hurts” singer gave us Jessica Rabbit realness in her custom Moschino by Jeremy Scott “Siren” dress with matching red boa. Her hair screamed Old Hollywood while her dress screamed, “Watch out, because later I’m going to floor you with my performance,” and that, she did. 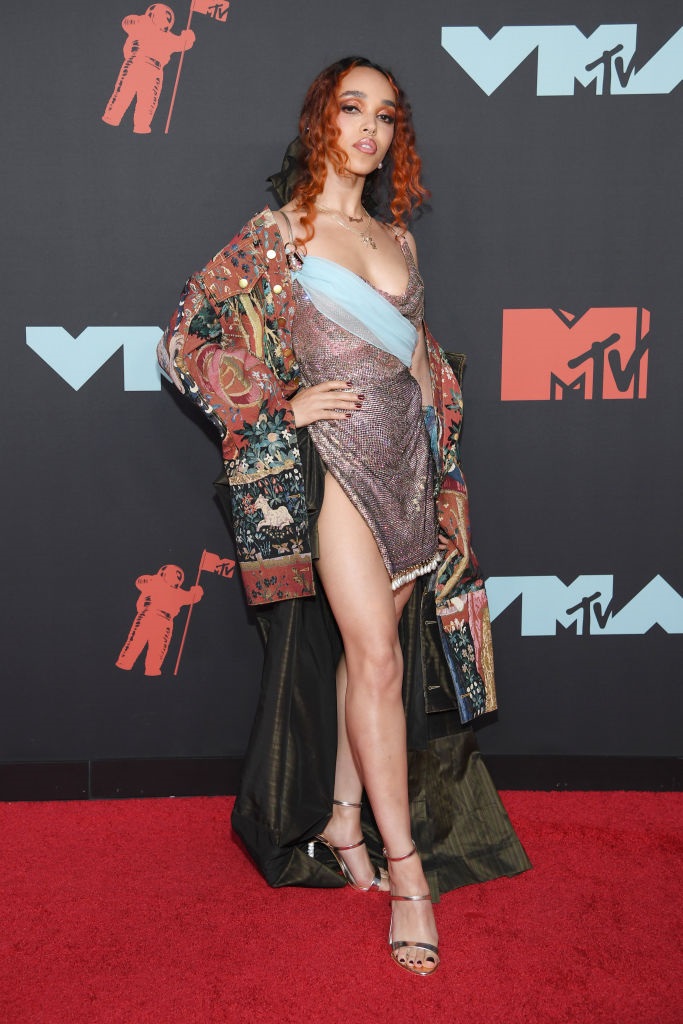 FKA twigs walked the red carpet looking like a Renaissance painter’s muse in an Ed Marler dress-and-jacket set and shoes from Sophia Webster. Marler is an up-and-coming couture designer who pulls inspiration from historical fashion and makes it edgy, modern, genderless, and fantastic to look at. 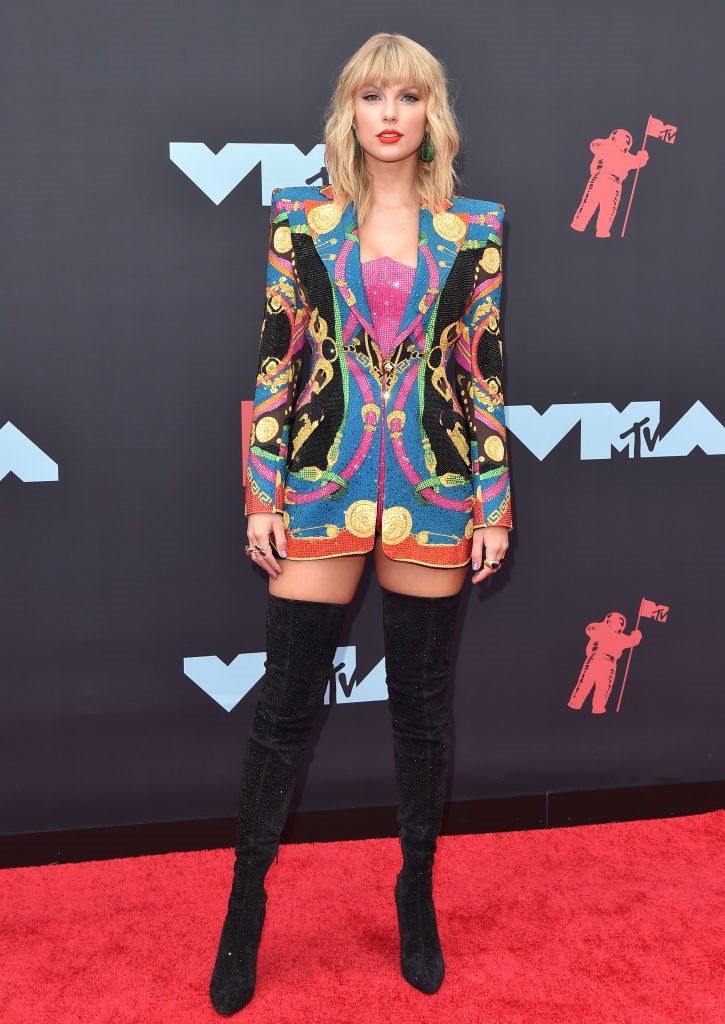 No, you’re not having déjà vu. Last night, Taylor Swift did wear a nearly identical Versace look to the one she served at the Teen Choice Awards mere weeks ago. However, this time around, she was decked out in a structured, beaded Versace blazer and paired it with thigh-high Christian Louboutin boots and Lorraine Schwartz gems. 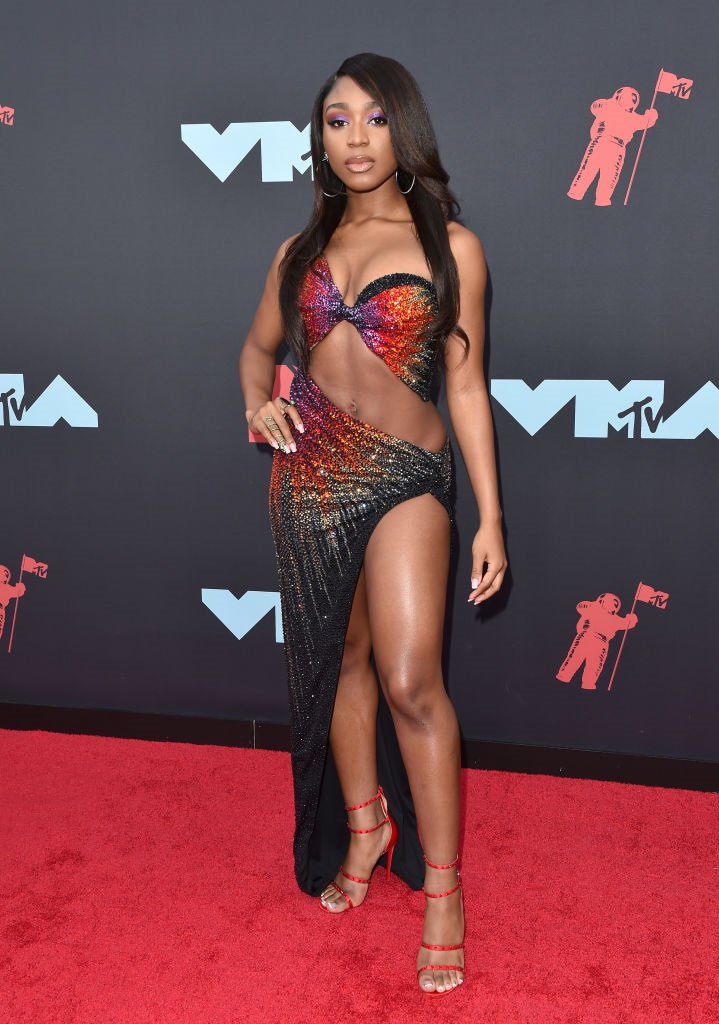 Normani brought the early 2000s back with the fashion in her “Motivation” music video. And she brought the 2000s to the VMAs red carpet, too, in her bedazzled Nicolas Jebran strapless dress that is straight out of Destiny Child’s wardrobe. Also, please take note of the giant hoop earrings and purple eyeshadow. The entire theme is on point. 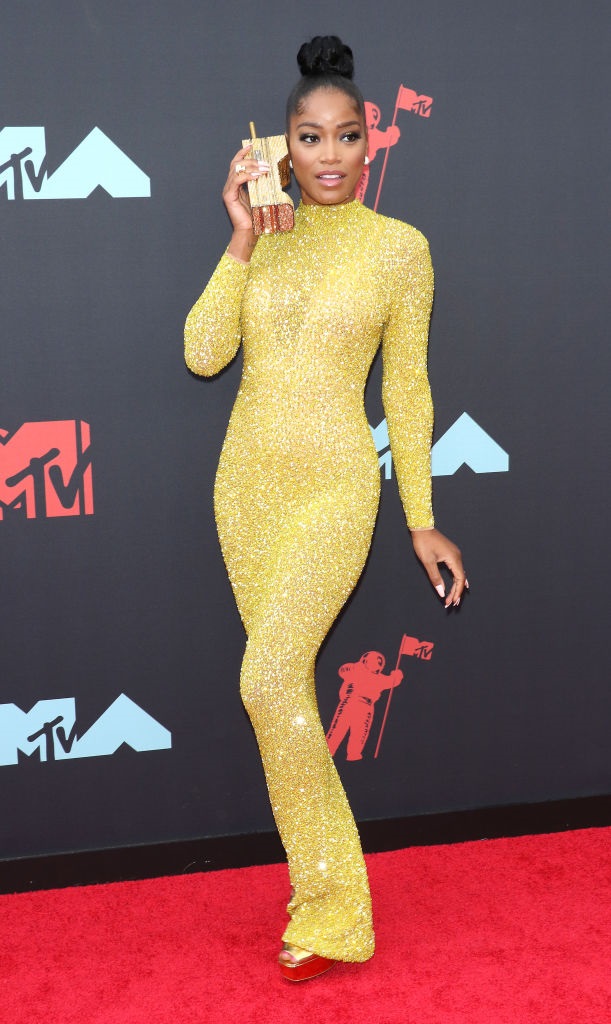 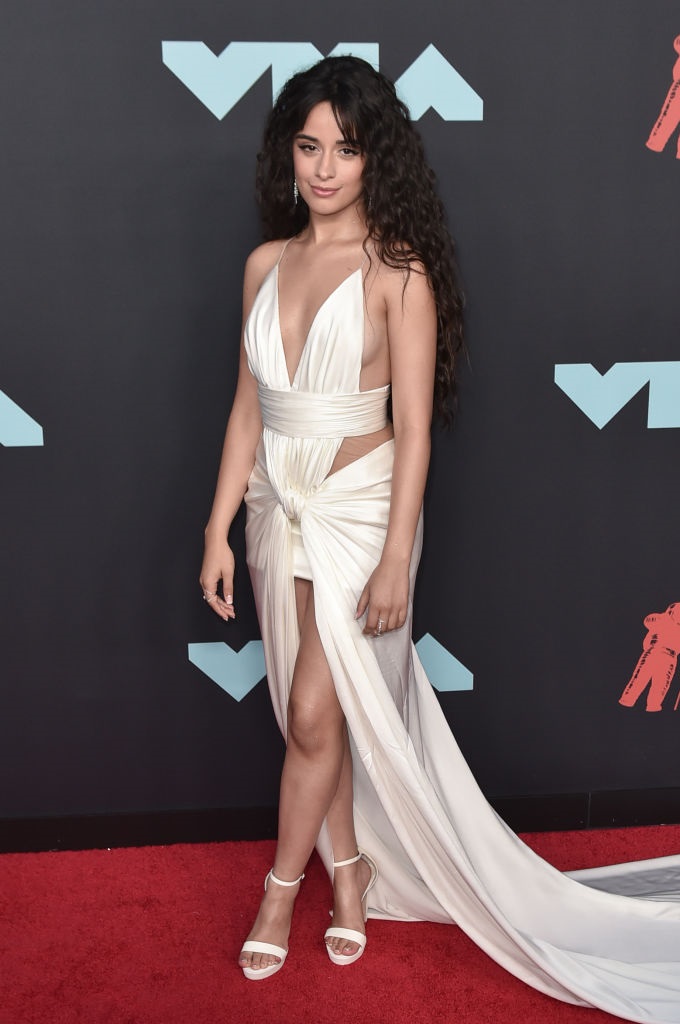 We don’t know how she does it, but Camila Cabello—who won the Best Collaboration VMA with Shawn Mendes for their song “Señorita”—knows how to look sweet and sexy at once. Her white Balmain dress is the perfect example. It’s seemingly innocent and classy, however, the cutouts, deep V-neck, and high-low hemline ooze sex. She knows what the heck she’s doing. 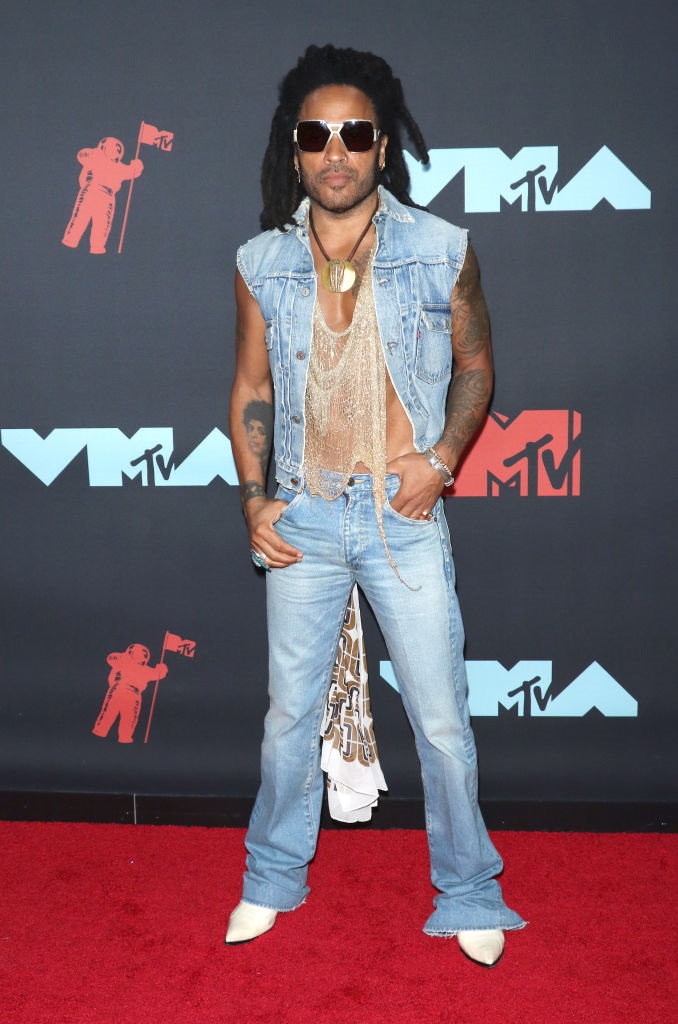 We’re sorry, but if Lenny Kravitz is at the function, he will always be on our best-dressed list. Kravitz has been pulling the same, cool-guy, ripped-shirt, all-denim, bell-bottoms, shades-and-scarves look since forever and we’re never going to get tired of it. Disagree with us, disown us, do what you need to do. But Lenny is always in style in our book, and you can’t make us think otherwise.

What were your favorite VMAs looks? Something tells us that sparkles are back in in a big way.