The best free dating apps that are actually worth your time

Raise your hand if you know someone who met their significant other on a dating app. Is it raised? We’re not surprised. As one of the most common and steadily rising ways people are meeting their spouses (yes, spouses), it’s no longer out of the ordinary to hear of someone—be it a close friend, family member, or relative—who has met their forever person via some form of a free dating app. 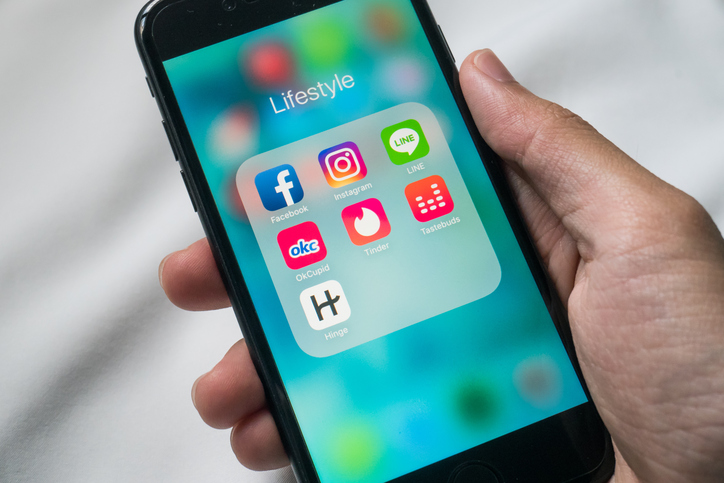 Whether it be Tinder, Bumble, Hinge, OKCupid, or even the brand-new Facebook Dating feature, a 2019 study conducted by The Knot  reported a whopping 22 percent of spouses are now meeting online. And that number has been steadily increasing since it jumped nearly threefold from 2013 to 2016, according to a study conducted by the Pew Research Center. So yes, dating apps do work.

You may not be actively seeking out your future spouse, but if dating is on your brain, it can be tough to pick which dating app is best for you. Their rise in popularity has made more free dating apps available for download. With lots of options, you can chose your preferred dating app based on profile style, communication options, and more, giving you lots of freedom. After all, dating should be fun, so why not pick a dating app that you actually enjoy using?

For some dating apps, you have to throw down a small sum, but here are the best free dating apps for those who know that money can’t buy you love.

Of course we had to include the one that started it all, Tinder. For those looking for a quick “hot or not”-style matching system and an efficient method of meeting people, look no further than Tinder. Swipe right on the profiles you like, and left on those you don’t, and Tinder will let you know when you have a match. Toss your match a clever first line and the rest will be history. Download it on Apple or Android.

Bumble works the same way as Tinder—we are swiping our little fingers away. But Bumble’s users often have lengthier and more descriptive bios. Plus, ladies have to message first. If you don’t, your matches will expire. If you’re over Tinder, Bumble might be a good and slightly more interesting option for you. It also has a great networking and friendship feature. Download it on Apple or Android.

With the slogan, “Designed to be deleted,” Hinge is a dating app designed specifically for more serious connections. Users connect with each other based on their mutual friends and proximity. Profiles are more detailed and reveal more information about a person’s interests compared to other apps. Plus, users on Hinge are often looking for relationships, so if that’s what you want, you and your matches are more likely to be on the same page. Download it on Apple or Android.

Facebook dating just launched in September of 2019, so some features are still being added, but the premise it simple: You can opt into Facebook Dating and create a Dating profile that’s separate from your main profile. Unlike some other apps, Facebook Dating isn’t about swiping or having to wait for someone to like you to get a first chance at reaching out. If you are interested in someone, you can comment directly on their profile or tap the like button to let them know. If you aren’t interested, you can pass on them. Read one of our writers’ experiences with it here.

OkCupid is more of a traditional dating site. Users create profiles and answer questions to determine their “match percentages” with other users. If similar interests is your priority, OkCupid is a great option for you. The app has an open system where you can search for users based on specific criteria that you are looking for. OkCupid also allows you to search for users who are online at the same time as you, and allows you to customize your searches. Download it on Apple or Android.

Coffee Meets Bagel is a great app for users who don’t like waiting to find matches. In this app, women “like” or “pass” on a small group of men who have already liked them, and men see a slightly larger group of women each day. Download it on Apple or Android.

Happn is the “missed connections” of dating apps. You know that horrible feeling you get when you see someone hot IRL and know that you will probably never see them again? Happn is the solution! Users see other users they have crossed paths with using the app’s built-in GPS system. Find that hottie from the bus once and for all. Download it on Apple or Android.