The less-than-$10 formula has helped my skin more than any other product.

As a chronic skin-picker whose diet incorporates plenty of chocolate and dairy products, I never expected that my teenage hormonal acne would totally disappear when I reached adulthood. Yet while I did deal with my fair share of pimples in college and adulthood, my skin was usually not too bad; I could always cover up the one or two zits on my face at any given time with concealer. But around my mid-20s, things started getting worse. I began breaking out regularly, especially around my chin and mouth, and my constant face-picking made even the smallest pimples stay inflamed for days or even weeks.

However, while I certainly felt insecure about my skin, I didn’t do much to treat it other than use a daily face wash and invest in scores of acne patches that I’d put on before bed. My reasoning was mostly denial—my skin wasn’t that bad, I told myself; going to a dermatologist would mean admitting that it did require a bigger fix and also opening up about my face-picking, about which I had a lot of shame. So for about two years, I stayed the course, even as my skin continued to not improve.

This summer, though, my acne got bad enough that it was impossible to cover totally with makeup, and I found myself editing out pimples from photos before posting them to Instagram because of how embarrassed I felt. I hated that I was 26, almost 27, and still breaking out so much—wasn’t my skin supposed to have calmed down by now? So, after a lot of whining, I decided it was finally time to do something different. I made a virtual appointment with a dermatologist, Shari Sperling, M.D., to get her thoughts on how to bring my acne under control.

First things first, she gently chastised me about my habits—the face-picking, obviously (“the worst thing to do is pick and squeeze,” she reminded me) but also my diet and stress levels. I agreed that I could definitely make some changes, but we both knew they wouldn’t solve my problem completely. After determining that my acne was hormonal and not perioral dermatitis, a rash-like skin condition that occurs around the mouth, Dr. Sperling walked me through the different treatment options.

First, there were over-the-counter products, like Differin, a popular retinol treatment that “helps to normalize the skin texture and smoothens you out,” as Dr. Sperling explained. Then, there were topical antibiotics with benzoyl peroxide, like doxycycline or minocycline, primarily meant for acne that requires an “extra little push” to disappear, as well as the blood pressure medication Spironolactone, which can help with hormonal acne. Accutane, too, came up as an option, although Dr. Sperling didn’t think my skin required something that intense.

After weighing the options, we decided that I’d start with the Differin gel while also using a mid-strength benzoyl peroxide face wash. I’d keep an eye out for side effects like dry or red skin, and if I didn’t see changes after a while, Dr. Sperling would put me on prescriptions instead. So, having given me a solid new plan, Dr. Sterling wished me luck and reminded me to please stop picking my face.

Over the next two months, I dutifully applied Differin each day, but despite being a beloved product by many people, it did nothing to help my acne. If anything, my pimples only seemed to get worse, so much so that I had no idea the cleanser I’d ordered, the PanOxyl Acne Creamy Wash with 4% benzoyl peroxide, was actually making a difference. So I made a followup appointment with Dr. Sperling, during which she told me to stop with the Differin, continue with the PanOxyl, and start using two prescriptions at morning and night: Aczone, a gel, and clindamycin phosphate, a topical antibiotic. 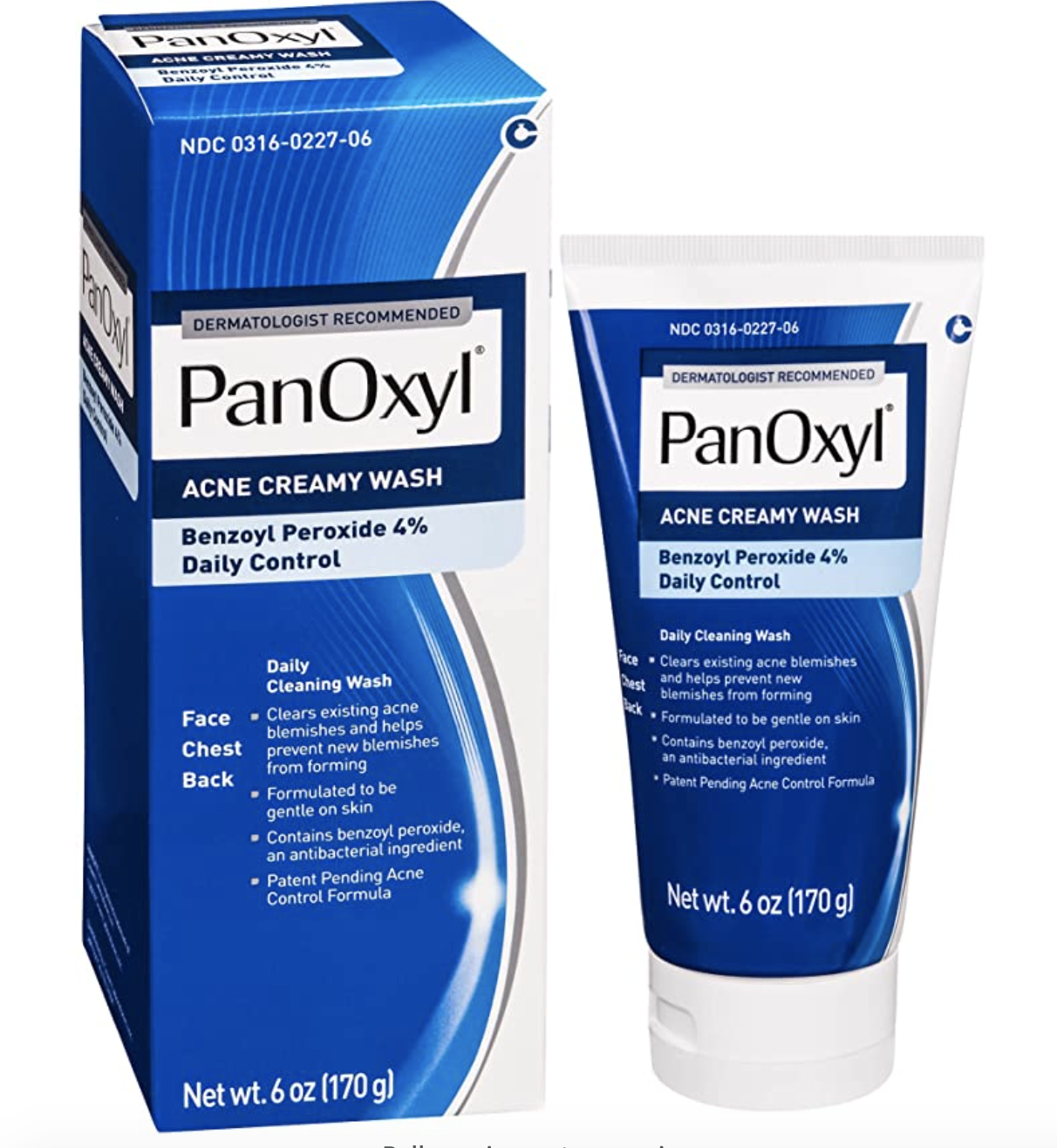 I did just that, and for another two months or so, I didn’t see any change. Frustrated, I briefly switched back from the PanOxyl to my previous face wash, but when that ended up making my skin break out even more (even on my forehead and nose, which typically stayed clear), I quickly reversed my decision. I not only started using the PanOxyl nightly again, but I spent more time washing my face, making sure the cream really got to do its job. And suddenly, it was like a switch flipped. My acne started going away—not completely, but enough that I could be bare-faced on a Zoom call and not feel skin-conscious.

Of course, I’m sure the medications probably also had a hand in clearing up my skin, but I feel confident that it was primarily due to the PanOxyl. After all, it was only after I stopped and re-started using the face wash that my acne finally improved, when there’d previously been zero change from the Differin or the meds. My skin’s stayed relatively clear for a few months now—and while I don’t apply the prescriptions every single night, I do use the PanOxyl without fail.

Today, my skin is a far cry from what it used to be. It’s definitely not perfect (I have a pretty large pimple near my mouth as I write this), and while my face-picking habit has gotten a bit better, it’s still enough of a problem to make any zit I get last longer than it should. But thanks at least in part to the PanOxyl face wash, I’m so much more confident about my skin than I used to be, with a face clearer than I could’ve imagined just six months ago.