OMG, Ben Affleck’s son did not have a good time playing with Prince George

We know, it’s fun to live vicariously through celebrities’ lives, imagining them all being fancy friends and participating in fancy friend activities together. Unfortunately, sometimes celebrity kids are NOT along for this celeb hangout ride.

We’re looking at you, Ben Affleck’s son Samuel, and we’re for sure talking about your surprise playdate with Prince George and Princess Charlotte. 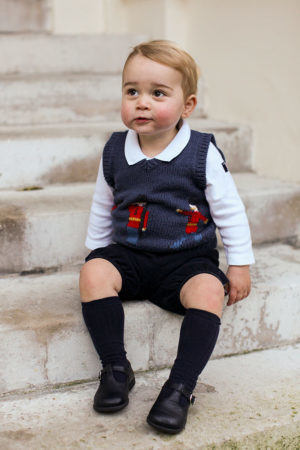 On The Graham Norton Show recently, Ben explained that on a trip to London, where he took his kids to

"Windsor Castle...the Tower of London...everywhere that the royals go and live and have cut each other's head off over history..."

At one point Affleck took Samuel to a less-historically-significant-but-probably-more-fun-for-a-small-child Kidnasium. Affleck quickly detected a “weird vibe.” It was pretty empty, there were dudes in don’t-mess-around suits everywhere wearing Secret Service headsets, the works.

"I was the last person in there, for sure, to realize that the royal [children] George and Charlotte, that those kids were in there playing, and my son was in there playing, so now I can tell him' You got a cold from the King of England.'"

To be honest, we’d be down to suffer the consequences of a cold if it meant getting to hang out with the Prince George and Princess Charlotte for a few, but we are adults that get what a big deal the royals are. Samuel Affleck, apparently, not so much.

“Go talk to them! Impress them! Be nice to them! You know what to say!” Affleck joked to Norton.

Joked or just said something serious in a joking way, we wonder? Prince George and Princess Charlotte, after all,  are probably the fanciest kids in the world to hang with. (All right, Prince George, Prince Charlotte, AND Blue Ivy, you can stop buzzing, Beyhive).

The glorious thing about children is they for the most part don’t care about status, they just want to jump in the ball pit at Kidnasium and have a great time, and royal children are also in that ball pit, whatevs. It’s good to know that Samuel isn’t susceptible to the hype machine just yet. Never change, Little Affleck, never change.