When I turned 30, I expected the milestone to set a series of spectacular events in motion. Spoiler alert: Nothing in your life automatically changes just because those digits go up. So, while I was able to count my blessings, the same dissatisfaction from my 20s lingered. Happiness came in spurts; most days, I was just going through the motions. I was single (and unhappy about it) and I was feeling the envy that comes from seeing people around you “winning” and wondering, Why not me? When 31 came around and felt the same as 30, I knew something needed to change, ASAP.

I know this about myself: When my light shines, it attracts others. First I had to investigate what was dimming it. I took inventory of what I perceived to be my flaws and decided that between 31 and 32, I would systematically dismantle each one. I was convinced that figuring out how to love and accept myself was the single most important thing I could do to move forward. I considered that maybe I wasn’t attracting people because I was saddling them with the burden of providing validation, when that’s no one’s job but mine.

The main target on my list was to become my own #bodygoals. I wasn’t going to put Serena Williams or anyone from Instagram on my vision board; I was going to shape my body into one I was proud of. And because goals need to be specific and measurable, I picked the biggest deadline I could think of: Caribana on Saturday, August 4th, 2018.

Caribana, also known as the Toronto Caribbean Festival, is the largest celebration of Caribbean culture in North America. It’s estimated that over 1 million revelers descend upon Toronto, Canada each year in a week-long tribute to the history and traditions of the Caribbean diaspora. One of the highlights of Caribana, and in many Carnival celebrations around the world (including Miami, London, Barbados, and the granddaddy of them all, Trinidad and Tobago), is the opportunity to “play mas.” Rooted in tradition that started with African slaves in Trinidad in the 1700s, mas derives from masquerade and is a parade in which people don elaborate costumes and dance to soca and calypso music. The costumes are a big deal. Designers start choosing themes and working on them months in advance. Notably, they often leave little to the imagination.

I am not of Caribbean descent—I don’t know much of my ancestry beyond that my grandparents migrated from the South to Detroit, like many other African Americans—but I recall driving up from Detroit to Toronto with my family when I was a kid and being in awe of the beautiful women in their pretty costumes. In my mind, if I could get in shape enough to fit into a costume, then have the confidence to parade through the city in it, it would be a very public declaration of self-love.

Costumes can start around $500 and increase in price with the more elements you add. With that amount of money on the line, there was no turning back. The caveat is that you have to physically pick up the costume in Toronto the week of Caribana. This means, although I paid my deposit in April, I wouldn’t know how it’d fit until August! This added a level of stress I cannot convey.

I knew I wouldn’t look Rihanna-level fire, but I wanted to come close. Everyone told me to chill; Carnival is one of the most body-positive, safe spaces ever. But it brought me no solace when my friends said, “Stop worrying! There will be much bigger people than you there!” I knew the difference between those people and me was not the size; it was the confidence, and that was still in progress. I changed my diet drastically, cutting back on processed foods and alcohol. I started off with bootcamp four days a week. When that ended, I jogged miles in the park on weekends, did YouTube workouts on weekdays, and hit the gym and SoulCycle. The numbers on the scale weren’t moving much, but the difference was tangible. My clothes were too big, and people started to notice in pictures and in passing that I looked leaner. I slowly became more bold with my style because I was becoming more comfortable with my body. But I’d be lying if I said it didn’t border on obsession. I’d check my abs in the mirror every morning and gauge how flat my stomach was. I cashed out on new clothes from Fashion Nova and MissGuided because I wanted to be “Instagram hot.” I spent hours fixating on hair and makeup looks. 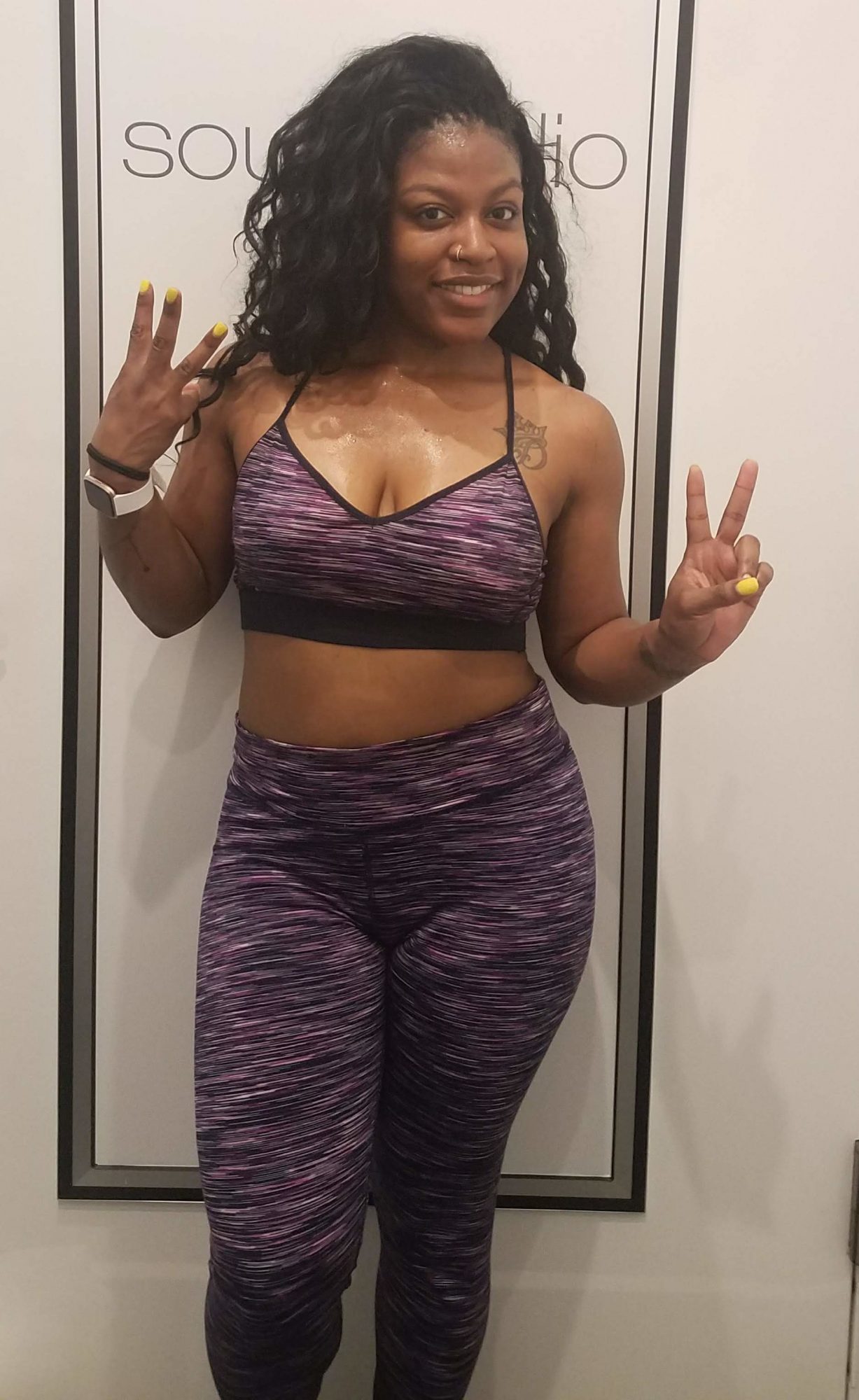 On August 2nd, I touched down in Toronto and went straight to pick up my costume. As the designer explained how to put together the look, my stomach sank. The bikini bottom, though a size large, looked too small. The big day was just two days later, which meant there was no time to get a bigger size. I woke up at 6 a.m., got dressed, and…felt like a failure. The bottom was indeed too small, and the stomach that looked flat in my mirror at home was hanging over the sides. I stared at myself and wanted to cry. 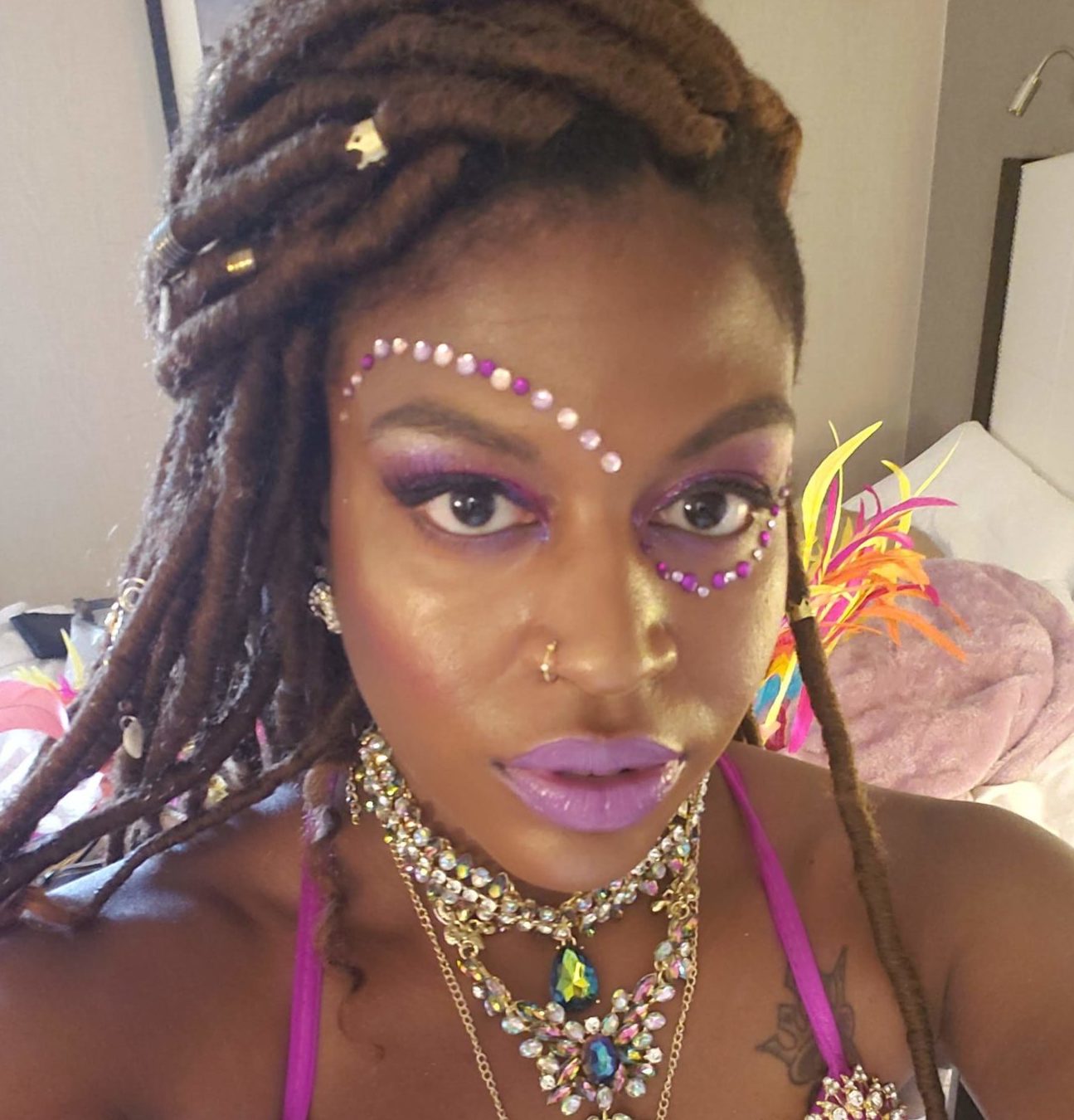 But the fact was, it was too late for that. I had no choice but to keep getting dressed, layering on each piece like armor: bedazzled bra, sparkly stockings, jeweled belt, necklace, feathered leg bands, feathered arm pieces, body chains. I did my makeup, splashing on a purple lip and improvising with lavender rhinestones. By the time I was done, I was amped to hit the road. 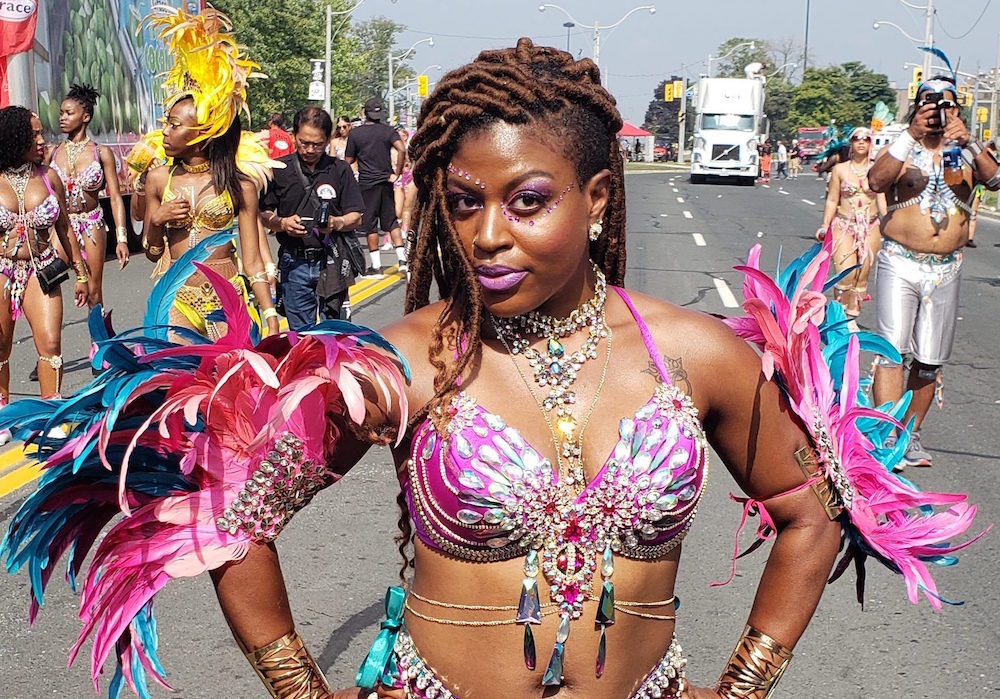 Was it the triumphant coming-out party I imagined? It actually was. A million selfies and “ussies” later, as my friends and I danced among thousands of people of all shapes, complexions, and ethnicities, I felt sheer joy in partaking in this cultural experience. I learned there is freedom in removing pressure to look a certain way and just being present. There was a current of jubilation in the city that was so much more powerful than my insecurity.

I believe it’s important to like what you see in the mirror and to celebrate yourself. But when I look at the photos of myself from that day, there is an energy that shines through. The internal transformation reflects back at me, and I know I’ll always remember Caribana as a highlight of my journey to self-love.