Sacré bleu, the first ~official~ pictures of Lumiere and Cogsworth from “Beauty and the Beast” are here!

The day has finally come: We finally have an official look at what Lumière and Cogsworth will look like in the live-action Beauty and the Beast. Get ready, because all your tale-as-old-as-time dreams are about to come true. Or…uh, maybe you’re about to have some tale-as-old-as-time nightmares? Sorry, but someone had to say it.

Just kidding! Mostly. Okay, remember back a month or so ago when we happened to stumble upon some early ~leaked~ pictures of these two wise-cracking Beauty and the Beast sidekicks? At the time, we weren’t sure WHAT we wanted to believe about the pictures, whether they were the real deal or very good dupes, but they seemed legit, and we were like…okay.

Now, thanks to Entertainment Weekly, we’ve got a new batch of Beauty and the Beast pictures, and we can confirm that yes, those earlier pictures were the real deal. We can now ~officially~ talk about what these characters  will look like in the movie. And they look…well, très different from what we’re used to. 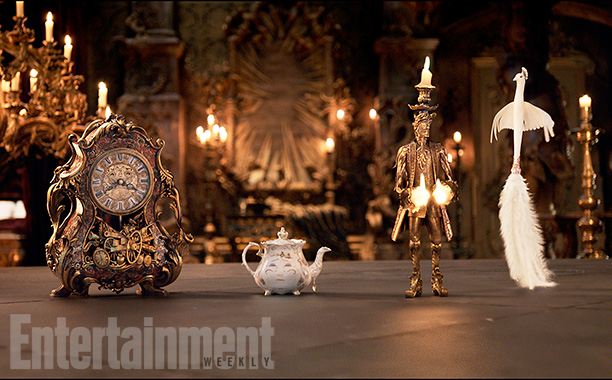 The biggest takeaway from this is that they look so…fancy. Like that is some INTRICATE clockwork, Cogsworth. Also, Mrs. Potts is *tiny* compared to Cogsworth, who looms over her (and where TF is Chip??). Also, Lumière actually has legs?? And like, an actual face along with what appears to be a long jacket with coattails? This is weird.

But good! A good kind of werid! And now, we can’t help but feel 100% more excited to check out this movie with our own eyes. Hopefully a full-length trailer drops soon, because it’s going to be a long wait until March 17th, 2017.