“I wish to live whatever life I have as fully and as sweetly as possible, rather than refocus that life solely upon extending it for some unspecified time. I consider this a political decision as well as a life-saving one, and it is a decision that I am fortunate to be able to make.” These words are just a few of the many quotable bits you’ll find in the reissue of Audre Lorde’s 1988 collection of essays, A Burst of Light.

Born Audrey Geraldine Lorde in 1934 to West Indian parents in New York City, a young Lorde embraced poetry early. She dropped the “Y” from her name at 4 years old because she found it to be more aesthetically pleasing, and had her fist poem published in Seventeen magazine while still a teenager. And it was through her writing and its poetic form that she went on to inspire and liberate the hearts and minds of many with her personal truths. 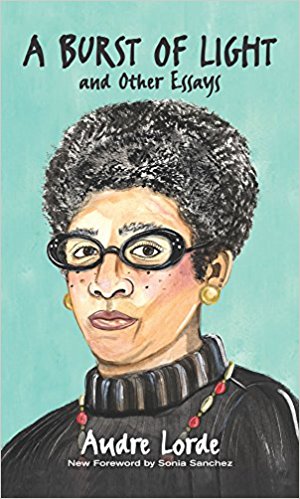 Audre Lorde described herself as “a black lesbian feminist mother warrior poet” (never one or the other) because she refused to be boxed in by any singular preconceived notion that allowed her readers to make assumptions about her identity or cause.

The updated reissue of A Burst of Light comes with a foreword by Sonia Sanchez, an interesting interview about sadomasochism conducted by Susan Star, and three additional essays, including “Turning the Beat Around: Lesbian Parenting 1986,” in which Lorde reflects on the highs and lows of co-parenting children with her white lady love. And of course, the original Burst of Light journal entries about her life with cancer. This book sheds light on Lorde’s struggle against racism, sexism, homophobia, and the liver cancer ravishing her ailing body.

In 1984, Lorde learned that her breast cancer had spread to her liver. She documents in great detail her journey going forward — from her initial denial to her brave decision to not have a biopsy, and instead opting to treat the illness using homeopathic methods at St. Lukas Klinik in Switzerland. Her lifelong struggles armed her with the strength and backbone to face her cancer, which somehow transforms A Burst of Light from simply a chronicle of Lorde’s fight against disease into one woman’s fight against life’s injustices.

There is absolutely no denying that Audre Lorde was powerful, and her words are a constant reminder of that. Her passionate essays and speeches on feminism, sexuality, LGBTQ issues, and race in this book are inspirational. They’ll touch you on a level that’s bone-deep, they’ll nudge you to reflect on your own life, and make you want to be better. And that was her goal.

“If one Black woman I do not know gains hope and strength from my story, then it has been worth the difficulty of telling, Lorde wrote.

The book is out now — read it and thank us later.