Here’s an astronaut eating pudding in space, which isn’t as easy as it sounds

Most of us probably take gravity for granted, but watching this video of an astronaut eating pudding in space reminds us why we totally shouldn’t. During his current 4-month mission aboard the International Space Station, NASA astronaut Jack Fischer has taken a few moments out of his first space mission to give us a play-by-play of what it’s like to eat gooey dessert in zero gravity, and let’s just say it takes a bit of patience and creativity.

While scarfing down a pudding pack isn’t Fischer’s biggest challenge in space, it probably would be ours.

In the brief clip Fischer shared to Twitter recently, he informs us that, “This is going to be pudding the space way,” before squeezing all the contents of a pudding package onto a spoon attached to a flat surface. 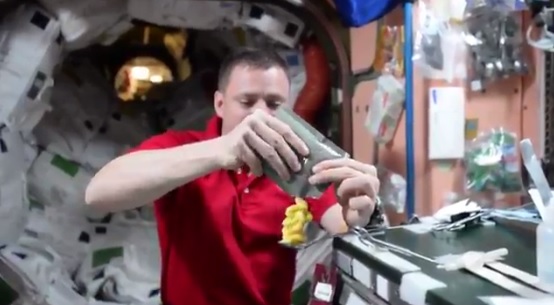 Before the entire pile of pudding manages to break free and float around the cabin, Fischer leans over the top of the creamy substance and scarfs most of it down. A little piece gets away but he chases it down and gobbles it up Pac-Man style because eating pudding in space is also kind of like a huge game.

LOL. So that was kind of fun, not to mention way less complicated than making a peanut butter and jelly sandwich in space, which has far more moving parts than this pudding situation.

Fischer hilariously described his towering dessert as a “leaning tower of yumiosity,” which suggests that his days of researching ways to get humans to Mars and erm, playing with pudding, could be followed by a future career as a food space critic.