Spoilers from Season 7, Episode 5 of Game of Thrones, “Eastwatch,” lie ahead, so read on at your own risk!

Littlefinger was up to another trick on Sunday’s Game of Thrones, because what else is new. And this time, it looked like he was trying to drive a wedge between Sansa and Arya — presumably to become closer to Sansa, which would mean becoming more powerful — and we are NOT having it.

In the episode, we see Arya keeping close to Littlefinger by following him around Winterfell and spying on him. Eventually, we see Littlefinger meeting with Maester Wolkan right outside of his room, and Wolkan — who is the successor of Maester Luwin, apparently an expert record keeper as you’ll soon see — gives him a letter. Littlefinger then thanks Wolkan on behalf of Sansa, tucks the letter away in his room, and leaves soon after.

After seeing the exchange, Arya sneaks into Littlefinger’s room and looks around for the letter. She eventually finds it hidden in his mattress, but what did it say exactly? And why was Littlefinger being so secretive about it? Well, it’s hard to make out the whole letter, but it’s pretty clear what it is from the bits we can see.

Sansa sent a letter to Catelyn and Robb in Season 1, asking them to pledge their loyalty to King Joffrey.

It’s important to note that she wrote the letter after being pressured by Cersei to prove her loyalty, to prove that she wasn’t a “traitor” like her father Ned. Littlefinger would know that because he was there, but how could Arya? Mhmm, pretty suspicious if you ask us.

"Robb, I write to you with a heavy heart," the Season 1 letter read. "Our good king Robert is dead, killed from wounds he took in a boar hunt. Father has been charged with treason. He conspired with Robert’s brothers against my beloved Joffrey and tried to steal his throne. The Lannisters are treating me very well and provide me with every comfort. I beg you: come to King’s Landing, swear fealty to King Joffrey, and prevent any strife between the great houses of Lannister and Stark."

If you take a look at this screen grab of the letter that Arya found and read, you can see a lot of overlap: 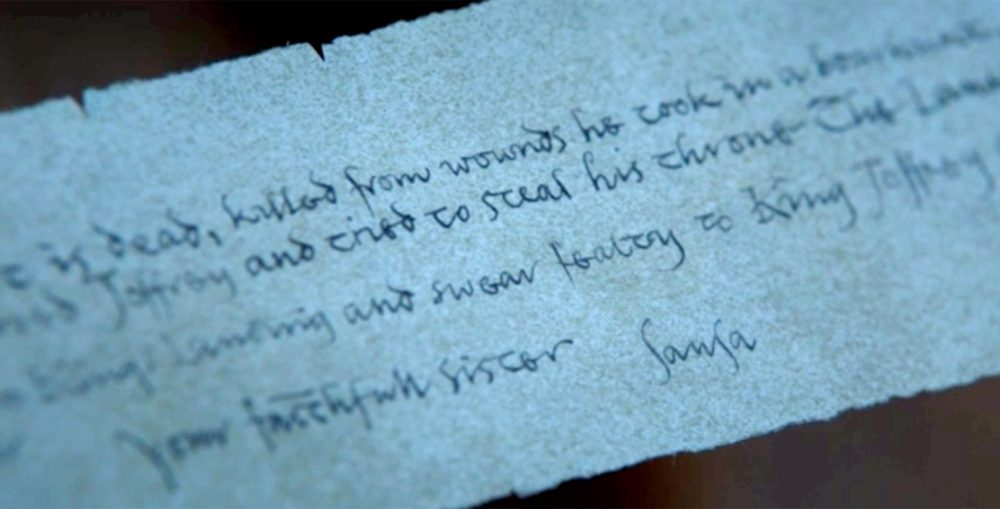 We’d like to think Arya would give her sister a little more credit and not believe what’s in the letter, especially that part about the Lannisters treating her very well. But there was a lot of tension between the pair this week, and the teaser for Episode 6 hints at even more drama. So it appears they aren’t exactly in the best place and maybe, though we certainly hope not, Arya will believe the worst.

As expected, Littlefinger is manipulating the situation.

Early in the episode, he appeared to have no idea that Arya was watching him — every time he looked in her direction, she’d already vanished — except he totally did. When Arya left his room after reading the potentially catastrophic letter, we saw Littlefinger watching her, a smug smile on his face.

After all the Starks have been through, we’re really hoping Arya and Sansa prevail and become even stronger together. Especially since Jon is off and beyond the Wall and Bran is, you know, acting all weird and doing his Three-Eyed Raven thang.

We’ll be keeping a close eye for any fallout when the penultimate episode of Game of Thrones Season 7 airs this Sunday.