The Carters blessed stans everywhere when they released their joint album, Everything Is Love, on June 16th. Rumors had been circulating about the prospect of a collaborative effort for a while, with neither Beyoncé or Jay-Z confirming or denying it. Ultimately, the duo rolled out the album unexpectedly (which has become their preferred method of expression), surprising both the world and the London audience of their On The Run II tour.

The album is headed by the single, “APESHIT,” which comes with a 6-minute long music video that shows the Carters as we’ve seen them before — madly in love, wealthy, and happily putting their own spin on an ancient institution (recall their “Family Feud” video). This time around, they took over the famous Louvre museum in Paris and made it their property in the Ricky Saiz-directed visual. Jay-Z specifically has used music and music videos to speak about his relationship with fine art before. In 2017’s “The Story of O.J,” he talks about buying million-dollar art, watching its value increase, and eventually giving it to his children.

It is clear that he understands art’s worth (from a financial and emotional standpoint) and views it as a medium that will make his family’s lives better, and “APESHIT” brought The Carters’ relationship with fine art to new heights.

The Carters’ video begins with a Black angel, which is a holy figure that older European art lacks. Archangels like Gabriel (the entity responsible for telling the Virgin Mary her destiny) and Michael (a fierce fighter who expelled Lucifer from heaven in the Bible) are often shown as white men.

The inclusion of a Black angel reminds the world that Black people have always had their own ideas of God and spirituality.

Sadly, Black religions have been demonized and are often persecuted, as though white people cannot stomach religious interpretations that don’t focus on them and their accounts. Beyoncé and Jay-Z’s chosen imagery challenges this white-centric ideology.

“APESHIT” was shot in and outside of the historic Louvre, which was once a palace and is now the largest museum in the world. By choosing a location that is directly linked to royalty and international art, the power couple crowned themselves as the worldwide king and queen of popular music. Their proclamation of Blackness — which is unfiltered and not subdued in any way throughout “APESHIT” — in an often inaccessible space like the Louvre is a statement in itself. 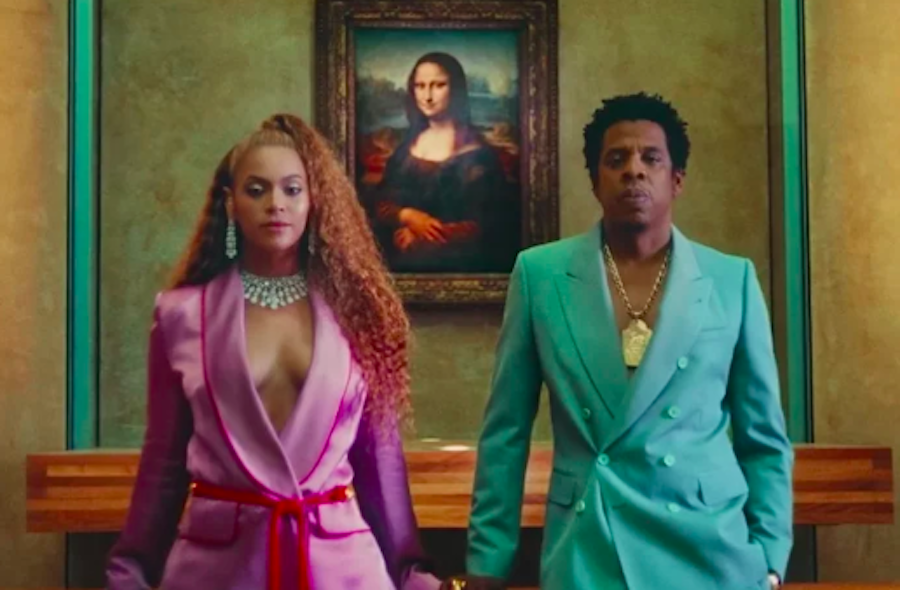 Black art curators like Kimberly Drew (also known as @museummammy) are working to create a culture where “more marginalized people enter institutions, learn the rules, and shatter and restructure them,” as she tells Brooklyn Magazine. These barriers in the art world relate to how art is sometimes taught (and created) solely from a white perspective. I studied art the entirety of my time in public school, and I don’t remember learning about non-white artists and non-white artistic styles. We weren’t taught art history from a Black/POC point of view, and definitely didn’t get many chances to see Black faces as artists or the focus of art.

“APESHIT” helps destroy the notion that fine art and its consumption is for white people.

Black people have long contributed to art, even though people have gone out of their way to ignore that fact (some people would actually rather credit the construction of the pyramids to aliens). The Carters are making — as well as honoring — history (in a world class location like the Louvre, no less) by crafting art and showing it to be, at its core, for Black people.

As far as how the Louvre’s exhibits intersect with the individual shots in the music video, art scholar Heidi Herrera wrote an excellent breakdown of the various symbols on Twitter.

In her thread, Herrera mentions Beyoncé’s victory as Black female, bringing attention to the comparison of the goddess Nike and Queen Bey.

She also speaks on Napoleon’s thirst for colonization and the implications of dancing in front a painting of his coronation.

Vox writer Constance Grady pointed out another detail on Twitter, explaining that the portrait spotlighted at the end of “APESHIT” is “Portrait of a Black Woman (Negress)” by Marie-Guillemine Benoist, “one of the only pre-20th [century] portraits of a black person in the Louvre that’s not explicitly a portrait of a slave.” false

There is this gross assumption that one of the only ways we can discuss Black people in art and history is by portraying slavery. Many Black people are tired of this characterization, and it is stimulating to see a Black woman represented as something other than a slave.

Perhaps one of the most stunning moments in “APESHIT” comes at the 2:14 mark. We see two Black women wearing durags and sitting back to back underneath “Portrait of Madame Récamier” by Jacques-Louis David. The presence of durags in museums is not foreign considering that Solange wore one to the 2018 Met Gala. But this time we get to see the headpiece as a part of the art itself. 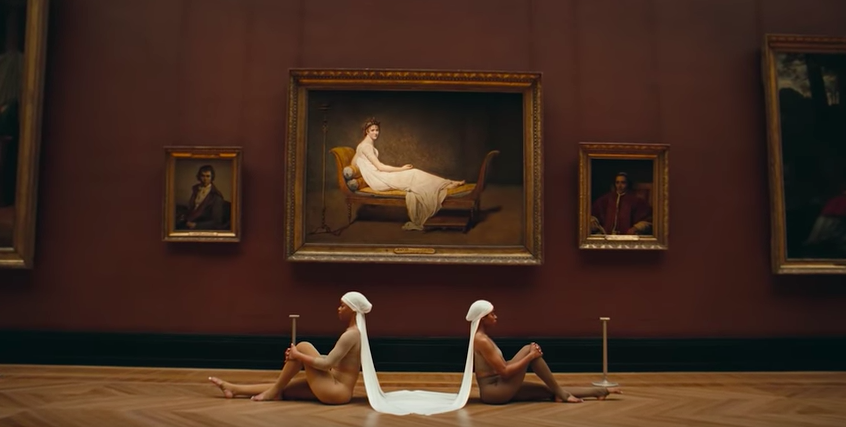 “APESHIT” is the ultimate “fuck you” to white supremacy. Beyoncé and Jay-Z are saying, “We made it, and we’re helping our people make it, too.” The video’s reference to police brutality (symbolized through the recreation of NFL players kneeling), Beyoncé’s decision to rap (a Black art form that is synonymous with rebellion), and the chance to turn the Louvre into a place to thrash make the video that much richer. Black people have had to see their artistic backstory erased and reimagined by white people over and over again. But if the Carters have anything to do with it, that time is coming to an end. SALUD!