Why Annie Savoy from “Bull Durham” is my feminist hero

It is my opinion that the three greatest baseball films ever were released in my lifetime, just a few years apart: A League of Their Own (1992), Field of Dreams (1989) and Bull Durham (1988). Though others may not share my exact rankings, these three are standard on any baseball-lover’s list. What draws me to these films is not merely the presence, in two out of three, of hunky pre-Waterworld Kevin Costner (the man loves baseball), but the fact that all three prominently feature strong female characters — unexpected in a genre celebrating a traditionally male sport. Though A League of Their Own wins points for its female-dominated cast of ladies actually playing baseball, Bull Durham is my favorite. It’s a story about an all-male minor league baseball team, but the main character and narrator is a woman unlike any other: an eccentric, romantic, baseball obsessive named Annie Savoy, played with wit and full-throttle sensuality by Susan Sarandon.

Bull Durham asserts its view of women in an early scene, when the Durham Bulls’ coach charges into the locker room to reprimand his star pitcher for squandering his pre-game energy on a “piece of ass.” Immediately, his female companion pokes her head into the frame and protests, “Skip, it is me! I am not some quote ‘piece of ass’ unquote.” “Oh Millie, jeez, I’m sorry,” Skip fumbles, and it becomes clear that women in Bull Durham have names, personalities, and agency, and are in control of their own sexuality. Millie plays a minor role in the film, most significantly allowing it to just squeak by the Bechdel Test. But neither she nor Sarandon’s Annie are the type to be written off as window dressing. In this regard, among others, Bull Durham is a thoroughly atypical sports movie. 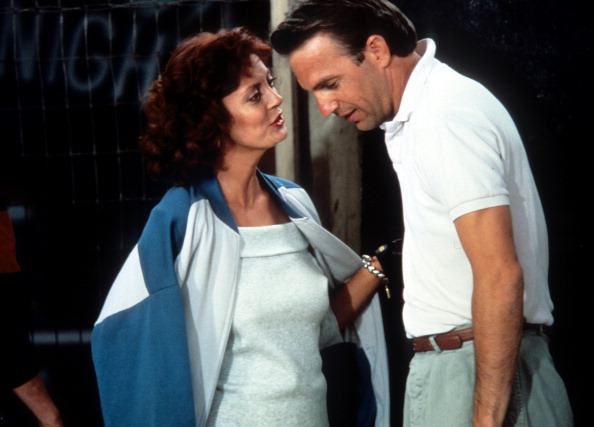 Annie Savoy is many things: a lover of Walt Whitman and Edith Piaf, a believer in mysticism and mystery, a sexual, southern woman and a teacher of English at a local community college. Entwined with all of her beliefs and passions is an abiding love of baseball, particularly the charmingly down-to-earth, minor league Durham Bulls. Each year, she counts down the days until the Bulls toss out their first pitch, and each year, she chooses a young player to mentor, both professionally and sexually. “I’d never sleep with a player hitting under .250, not unless he had a lot of RBIs and was a great glove man up the middle,” she declares. “You see, there’s a certain amount of life wisdom I give these boys. I can expand their minds.” At the film’s open, we see Annie puttering around her giant southern home, lighting candles in her baseball shrine, then walking over to the ball park on her own to take her place behind the dugout. She tells the story of her religion: “The only church that truly feeds the soul, day in, day out, is the Church of Baseball.”

Despite my longtime love of baseball movies, I didn’t really get hooked on Bull Durham until I was nearing 30. It wasn’t until then that I saw myself in Annie Savoy, or rather, I saw something to strive for, something that I wanted to be. I saw a female character that was single, in her thirties, unique and alive. The romantic comedy stereotype of a thirtysomething single woman is typically defined by one (or two or three) of the following qualities: a desire to find “the one” and get married, a desire to have children, or a desire to get ahead in an exciting, fast-paced career. Annie is none of these things; she’s living her life by her own set of rules, a luxury too often limited to male characters. Remarkably, the script allows her the liberty to be the complex and interesting human she is, without judgement. And with no small thanks to Susan Sarandon’s vivacious performance, she makes you want to be like her, flaws included. 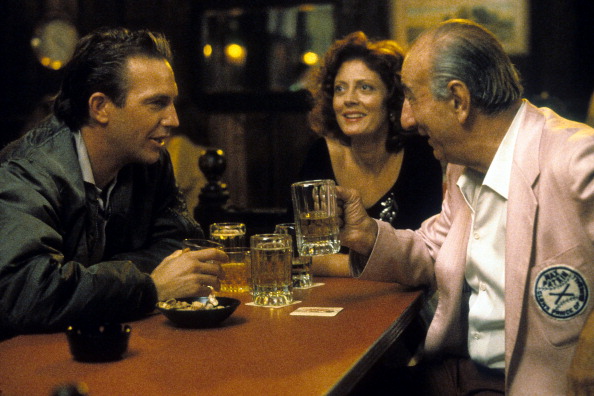 Though she’s a fan, Annie Savoy is much more than a baseball groupie — she’s an expert on the game, a trusted educator for the young men on the Bulls’ roster. Bull Durham revolves around Annie’s relationships with two players in particular: her protégé, rookie pitcher Ebbie Calvin “Nuke” LaLoosh (a super-goofy Tim Robbins), and “Crash” Davis (Costner), an aging catcher brought in for a final season who is also charged with mentoring the young, naive pitcher. Through new age practices and poetry (she ties him to her bed and reads him Leaves of Grass), Annie helps Nuke become a better pitcher and a better man. But it’s Crash she can’t stay away from, and the film spends most of its time on these two fiercely smart, witty characters as they espouse battling philosophies on baseball and love. Annie is a romantic, but never seems to lose an argument with a guy: she asserts herself in the male-dominated baseball world and with Crash as well, arguing with him about sex and winning streaks and literature (Crash: “What do you mean, William Blake?” Annie: “I mean William Blake!”).

I think what strikes me most about Annie Savoy is the fact that she does not feel the need to change who she is to “get the guy,” nor does she expect Crash to change for her. Toward the end of the film, she indicates that she’s “quitting boys.” She’s met her match and is ready to move on. She has her flaws, as Crash points out, but she has her own studied views on love, baseball, and the world, and she’s not going to let anyone, male or otherwise, bully her into changing them. 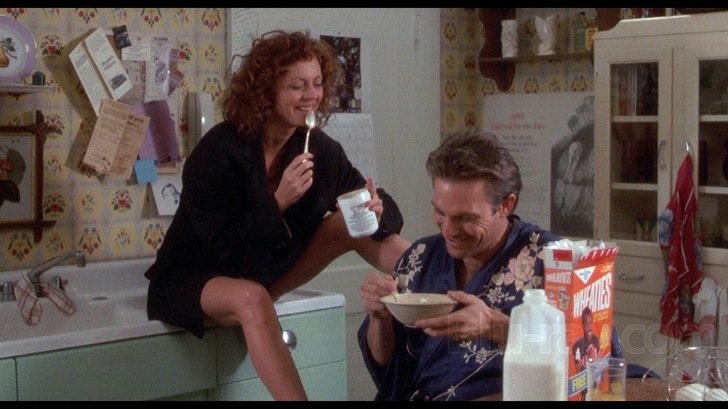 This is especially apparent in one of the film’s best scenes, when she meets Crash at the batting cages to show him how to improve his swing (and she belts a few for good measure). Crash gives a long monologue attempting to characterize her as a particular “kind” of woman (“I know women like you.”).  In a lesser film, this is the point at which the female character might be wounded, might realize there’s a kernel of truth to what he’s saying, and might begin to make changes in her life (think Trainwreck, when Amy throws out all her booze). Not Annie. Instead, Sarandon cocks her head and turns her large, mischievous eyes on Costner: “Oh Crash,” she sighs, “you do make speeches.” And just a few scenes and zero compromises later, they’re having crazy sex on Annie’s counter and dancing around in their bathrobes. Such is the fictional life of Annie Savoy, unsung hero.