After Anita Hill, the Kavanaugh hearings reveal the pain that so many Black women have always felt

Unless you have been purposefully shutting out the injustices of the world, you are aware of the allegations against Supreme Court nominee Judge Brett Kavanaugh. Dr. Christine Blasey Ford, a psychology professor and former high school classmate of Kavanaugh’s, has accused him of sexual assault, and on September 27th, they both testified in front of the Senate Judiciary Committee. An FBI investigation into Dr. Blasey’s allegations has followed suit—though numerous witnesses, and Ford and Kavanaugh themselves, were not even questioned. Some people who claim to have relevant information to share with authorities haven’t even been able to successfully get in contact with the FBI.

Many people of all genders support and believe Dr. Blasey, saying that it is high time that instances of abuse against women are taken seriously. Others, however, are misogynists who choose to live in denial. This entire situation, right down to the false idea that the sole purpose of Dr. Blasey’s testimony is to smear a man who could be granted a high judicial position, is eerily similar to the testimony of Anita Hill.

In 1991, Anita Hill testified against Clarence Thomas, another Supreme Court nominee. She accused Thomas of sexual harassment in the workplace, and her testimony also made national headlines. Though Clarence Thomas was still appointed to the highest court in the land, Anita Hill’s courage resulted in a watershed moment. Other women felt more comfortable speaking their truths, running for office, and more. 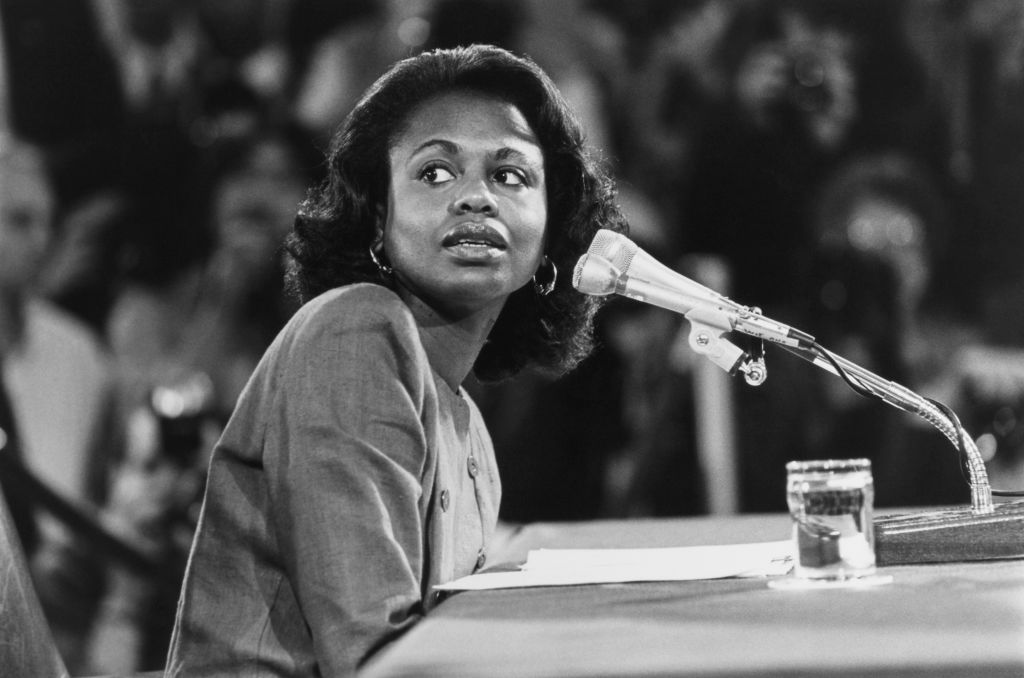 Sadly, though, Hill’s important role in history is also an example of Black women being abused and the offenders going unscathed. During the time of slavery, Black women were raped and beaten regularly by their owners. After the abolition of slavery, Black women in the South, such as Fannie Lou Hamer, were beaten in jail. Recy Taylor was abducted and raped by multiple white men in 1944.

The common thread is that these gruesome crimes went unpunished. While under oath, Anita Hill recounted times when Clarence Thomas sexually harassed her over the course of a lengthy career. Her allegations and subsequent testimony were referred to as “disgusting,” and called “gossip” and “dirt”. Thomas still sits on his throne, playing a hand in the law, nearly 30 years later; that doesn’t shock me because this country has dismissed Black women’s pain for centuries.

This dismissal of Black women’s experiences is directly connected to why Hill was not given the space to emote during her testimony. While comparing Dr. Blasey’s testimony to Hill’s, CNN commentator Joan Biskupic said, “[t]he vulnerability of [Blasey Ford] is coming through much more”—as if Hill did not also have her soul set on fire by Clarence Thomas. In an article for The Washington Post, Karen Attiah called out anyone citing the “Strong Black Woman” trope as the reason for the difference in Hill’s and Dr. Blasey’s demeanor during their testimonies: “Our so-called strength then makes us an even match with the men who abuse us. Indeed, we are easier prey in no small part because even when we gather the strength to share our trauma from sexism and violence, white people and white women in particular do not see our pain.”

People assume that Black women don’t have the same emotional spectrum as white women, and that assumption is harmful.

While the Kavanaugh hearing unfolded and Dr. Blasey courageously testified, many women on social media shared how appalled they were by what they saw on screen. The aggressive white male privilege, lack of humanity, and dismissals of sexual violence made it hard to watch. However, some white women on social media spoke about the Kavanaugh hearings as though they marked a new level of misogyny—as if we hadn’t witnessed Anita Hill’s experience, as if other Black women survivors haven’t been ignored for centuries.

Black women have been dealing with the painful reality that to be a woman is to be lesser in the eyes of men, and our race leads to us being even further marginalized. While white women will never know exactly how that feels, these reactions to Dr. Blasey’s trauma can be learning moments. If Kavanaugh is appointed to the Supreme Court, white women who didn’t think the government could be so careless towards their pain will be forced to understand how many of us have always felt. Additionally, white women have to toil to convince one another of their own humanity. A Quinnipac University poll uncovered that only 46% of white women believe Dr. Blasey—a reminder of the 52% of white women who voted for Donald Trump, even after his “grab ’em by the pussy” remarks.

Race is intertwined with how both Anita Hill and Dr. Blasey are viewed during their testimonies, and the how the world processes their pain—but the fact is that powerful men allegedly violated both of them, and they spoke out.

In a statement outlining her advice for Dr. Blasey moving forward, Anita Hill pushed for realness: “[Be] authentic and do what feels right for you.” These are two women who deserved more than they were given. I believe Anita Hill, and I believe Christine Blasey Ford.