Since we’ve seen this type of television show before on cable (and you’ve probably been sucked into an hours-long marathon of these shows at least once before in your life) we’re immediately left to assume that the TalkingHeadShelby and Matt are the real Shelby and Matt (Lily Rabe and Andre Holland).

While the Ahhh-Real-Danger Shelby and Matt in the Murder House 2.0 being played by actors (Sarah Paulson and Cuba Gooding Jr.). 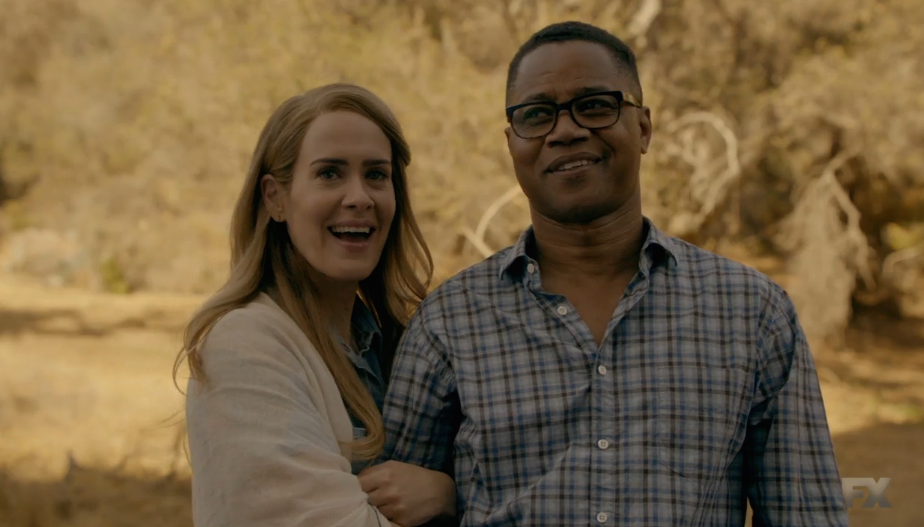 There’s nowhere during the opening episode that clearly states REAL Shelby is TalkingHeadShelby, but since we’ve seen this type of set up before, and know the premise, that is simply what we believe. All the intro states is that the following is inspired by true events — doesn’t specific what recount of events are actually TRUE.

Leading up to this season (lol, remember The Mist?), we were told we were dealing with misdirects. In total there were 51 teasers/trailers/promo images released for AHS Season 6, and only ONE of them turned out to be true. Like the theme for this season might as well be American Horror Story: Misdirects.

So, it would make complete sense for AHS to literally set up Season 6 with a misdirect. TalkingHeadShelby is really the actor, Ahh-Real-Danger Shelby is actually REAL SHELBY.

It’s possible that the events that happened at Roanoke were so crazy and insane, that when it came time to make the documentary, “My Roanoke Nightmare,” actors were hired to downplay events. If you’ve watched the episode (whispers, three times like I have), you might notice that the events TalkingHeadShelby explain don’t necessarily match up with what’s happening on screen. She’s sure talking about them, but she’s so much calmer than the insanity happening in Murder House 2.0.

Maybe she's so much calmer, because she's a hired actor reading off of a script, and didn't actually live the horror.

Also, let’s throw out there that it’s clear TalkingHeadShelby and TalkingHeadMatt are significantly younger than their “actors” in the show. But since these events happened in the past…shouldn’t the actors be younger than the Talking Heads?

Obviously, this might not be the case, and it could turn out that TalkingHeadShelby is actually real, and she’s telling her version of the story, and Ahh-Real-Danger Shelby is doing a great job being totally freaked out.

Or, this is just another sneaky misdirect and we’re totally on to you, AHS.