Last night on American Horror Story, we met “the most fucked up character of all time” and we didn’t even know it!

For about .5 seconds during “Chapter 7” we got to see Finn Wittrock, who Ryan Murphy has teased will be playing — his words, not ours — “most fucked up character of all time.” That’s a pretty loft statement to make, considering we’ve previously been treated  to the Addiction Demon, and then Vampires, and someone was sewed into a hotel mattress, and that was just last season alone.

In a ridiculously quick, blink-and-you’ll-miss-it moment, Finn Wittrock’s beautiful face graced our screen so fast, you don’t even have time to say, “Hey, was that Finn Wittrock?”

He appeared shortly after Audrey and Monet are captured by the IRL Polks, and it appears as if Finn is playing one of these Polks. On IMDB, he’s listed as “Cain Polk.” (During “My Roanoke Nightmare,” Cain was played by Orson Chaplin)

This is also (probably?) Finn, too. IT IS VERY HARD TO TELL, even after enhancing the picture like whoa. But, the HelloGiggles office has agreed that this is like,  98% probably him (and yes, this picture was originally upside down and I flipped it, okay?) 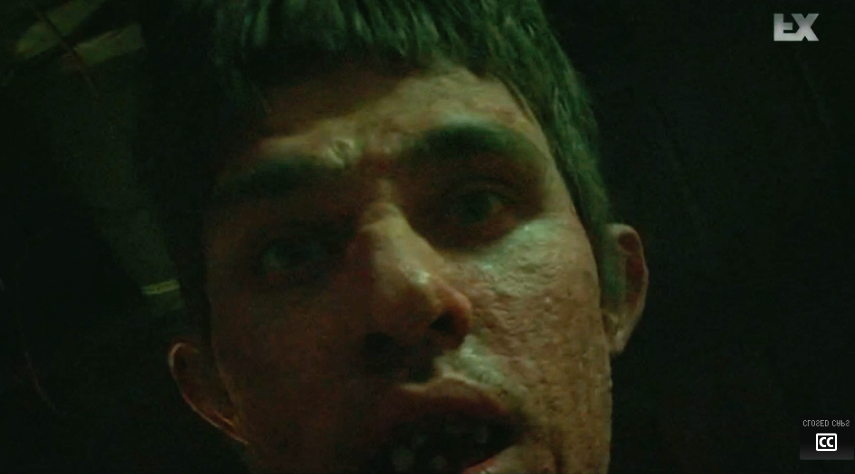 Other than terrorize the hell out of Audrey and Monet, Finn…didn’t really do much. It appears as if he was on camera duty for the torture scenes, which is why we didn’t see much of him. And so far, we have to say he hasn’t really done anything too ~fucked up~. Must be saving that for Chapters 8, 9, and 10.