Today in Dreams Really Do Come True, the next time you pick up a penny, you could actually be earning yourself a thousand bucks.

Here’s the deal: Ally Bank is running a “Lucky Penny” promotion across the United States, placing fake pennies on the ground with the message, “Lucky You, 100,000 cents” in place of Abraham Lincoln’s head.

100,000 cents is, of course, a thousand bucks, and if you find a penny like this, you can redeem your coin at an Ally Bank for your cash prize, yippee! 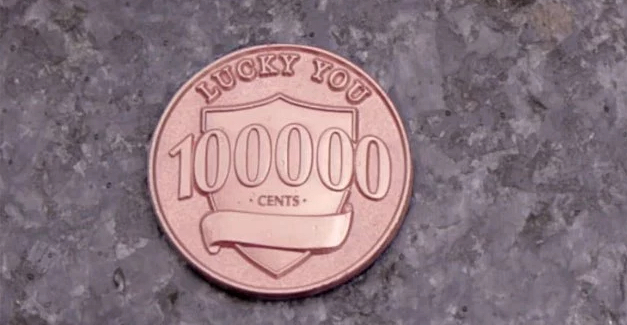 According to ABC News, Ally Bank — which is based in Detroit — hopes that the Lucky Penny promotion will encourage Americans to look for more opportunities to save in their everyday lives.

This all feels very Willie Wonka & the Chocolate Factory to us, and we wish players the very best of luck as they search high and low for that golden ticket — er, that is, lucky penny. Happy hunting!