Before she began work on her new album, Alicia Keys wrote a list of the things she was sick of — how women are “brainwashed” to have expectations of being skinny, sexy, and desirable. “I realized that during this process, I wrote a lot of songs about masks filled with metaphors about hiding,” she explained in a recent piece for Lenny Letter. “I needed these songs because I was really feeling those insecurities.”

The lyrics in one song, called, “When a Girl Can’t Be Herself,” reference these feelings, particularly hiding underneath makeup: “In the morning from the minute that I wake up / What if I don’t want to put on all that makeup / Who says I must conceal what I’m made of / Maybe all this Maybelline is covering my self-esteem.” Alicia says she was worrying too much about being seen in public without wearing makeup, and when a photographer requested to shoot Alicia straight from the gym sans makeup and in a sweatshirt, she was nervous, but did it anyway. After the photographer shot her in this all-natural look, Alicia realized she felt empowered and free. 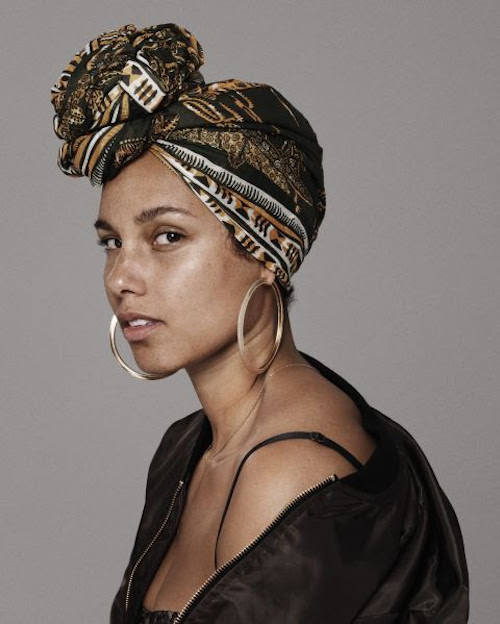 The photo from the shoot ended up becoming the artwork for her new single, “In Common.” Since then, Alicia has made it a point to be photographed without being made up, including makeup-free selfies and a photoshoot she did with Vanity Fair. Her husband, Swizz Beatz, posted a photo from the magazine on his Instagram. “You look 19 without makeup,” he wrote in the caption. “My fav pic. The fact that this is a new pic.”

Alicia also decided to stop covering herself up in more ways than one. “Not my face, not my mind, not my soul, not my thoughts, not my dreams, not my struggles, not my emotional growth. Nothing,” she wrote in the article.

While Alicia feels more “real and raw” in a bare face, there are plenty of others out there who feel the opposite — that wearing glittered eye shadow and bold lips IS powerful to them. It’s equally important to note that makeup can be empowering to some people, and that is totally fine, too.

Watch Alicia’s video for “In Common” below: https://www.youtube.com/watch?v=