All the things you might typically associate with the act of sleeping in your makeup—hangovers, breakouts, and stress—are the opposite of glam. However, Alice + Olivia’s FW20 New York Fashion Week presentation turned the slept-in glam idea into a look we now want to recreate on purpose. Designer Stacey Bendet says the new collection was designed with a ’70s bohemian rock goddess in mind, so the accompanying hair and makeup combined the laid-back energy of the decade with the sharper edges of the rock ‘n’ roll scene of the era. The result of this soft-with-a-punch collab? The ultimate cool-girl look.

Even the more slicked-back hairstyles were contrasted with an extra-smudged eye to deconstruct the overall look. “It’s cool when the makeup’s not so perfect,” makeup artist Erin Parsons tells HelloGiggles. Without the pressure of fine lines and perfect geometry, undone beauty looks feel more attainable and a lot more relatable. But of course, there’s a lot more to the beauty look than meets the eye, so we’re giving you the entire backstage breakdown, below. 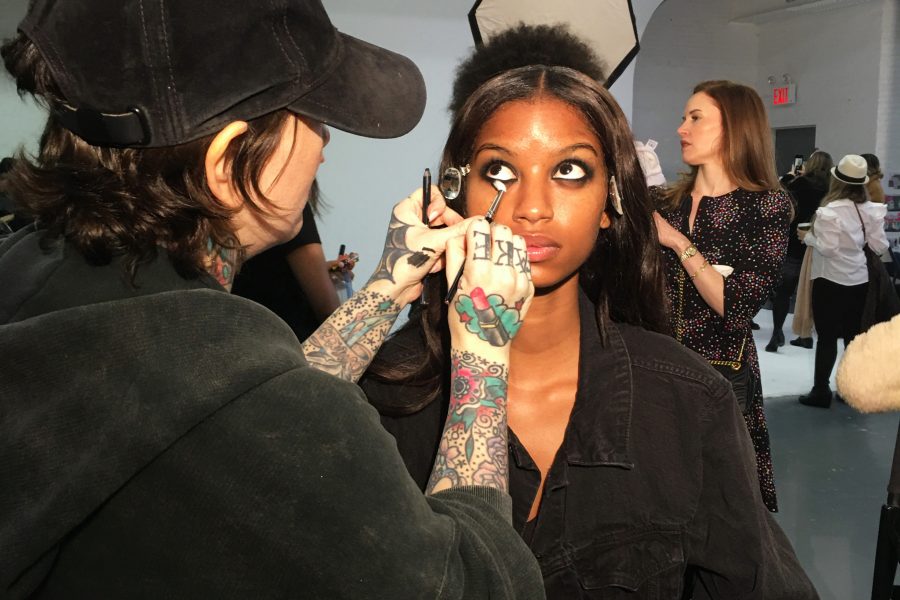 “It’s really all about the eye, and it’s such a good eye,” says Parsons. Each of the looks started with a black smokey eye using the Maybelline TatooStudio Pencil Eyeliner that was smudged to make it intentionally imperfect. Then, some of the models got an extra-glam glitter treatment on the top lid, getting either a shimmery bronze or green eyeshadow from the Maybelline City Mini Palette.

To get a richer pigment, the makeup artists scraped the shadows out of the palette, put it in small cups with a mixing medium or water spray, and mixed it all with a brush. “Then when you put [the eyeshadow] on, it looks wetter and more glittery—that’s why we get this amazing sparkle,” Parsons explains. She also says the mixing medium helps keep the product from creasing on the eye, but then again, “if it does crease a little, that’s more cool, that’s more rock and roll.” And to complete the eye, she loaded on the Maybelline Falsies Lash Lift Mascara. 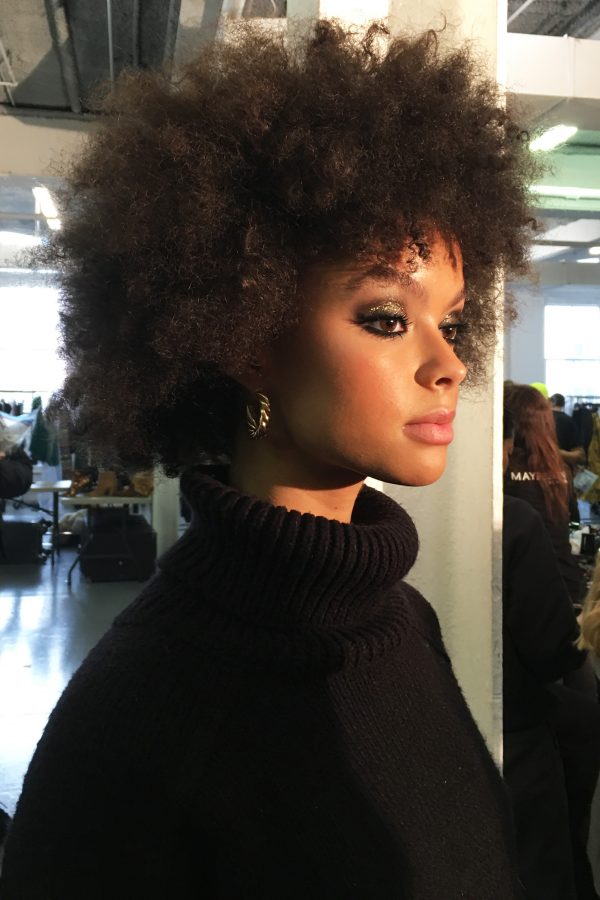 To keep the undone theme going on, the majority of the hairstyles featured natural textures or relaxed curls. Hairstylist Justine Marjan first prepped the hair with the TRESemmé Micro Mist Spray, then brushed it through to the tips. Then, to create the relaxed ’70s look, she used a flat-iron to create soft ‘S’ waves.

The most time-consuming part of the look was gluing on the crystals, which were placed onto the models’ hair one by one with tweezers and hair glue. Chin up! Marjan says this is easily something someone could recreate at home.

“This is definitely DIY—you can do it yourself with supplies from a craft store, so I think it’s something that anyone can play around with,” Marjan says.

Other models wore a sleeker look with hair pulled back into low ponytails and the crystals incorporated into the part. Still, the more polished look was balanced out with the undone eyes and brushed out eyebrows to keep the rocker-girl spirit alive. 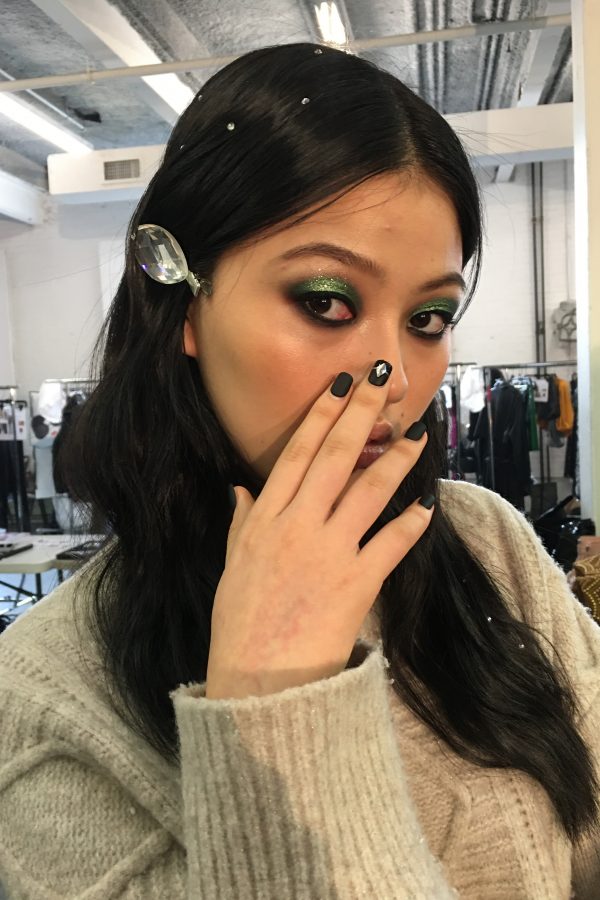 The nails kept right in line with the ’70s style, with some of the designs nearly resembling the cover of Pink Floyd’s Dark Side of the Moon. All the nails were done with the imPRESS’ Press-On Manicure Couture Collection—they featured a matte black base with some metallic detailing and gems on top. Some of the models’ nails were more decked out with gem-covered manicures while others had a more minimal look featuring just one or two accent nails, as pictured above.