Alexandria Ocasio-Cortez is taking a self-care break, and she needs your advice

UPDATE, December 18th: Alexandria Ocasio-Cortez clapped back at haters on Twitter who criticized her for taking a mental health break when she “hasn’t started working yet.” She responded by listing her achievements in the last year, not-so-subtly pointing out that she’s had to work hard AF to achieve all that she has.

Previously: Since her election to Congress in November, Alexandria Ocasio-Cortez has been busy in Washington. She’s not even officially a congresswoman yet, but she’s already been working tirelessly for the Green New Deal, which calls for a radical shift to renewable energy and has overwhelming bipartisan support, and fending off haters online. Understandably, she’s getting tired, so she’s taking a much-needed self-care break to refresh and reenergize before the New Year kicks off and her job officially starts.

She announced her intentions to take a self-care week on Instagram today, December 17th:

"I'm starting a week of self-care where I'm taking the week off and taking care of me. I don't know how to do that, though, so I would appreciate any and all self-care tips, because sometimes people are like, 'Top 10 tips for self-care: Go to Cancún!' And I'm like, is it a face mask? I don't understand. I just don't understand."

Ocasio-Cortez revealed that before she started campaigning, she did yoga three to four times each week and cooked healthy meals for herself. During the campaign, though, the yoga came to a grinding halt, and fast-food meals became de rigeur. 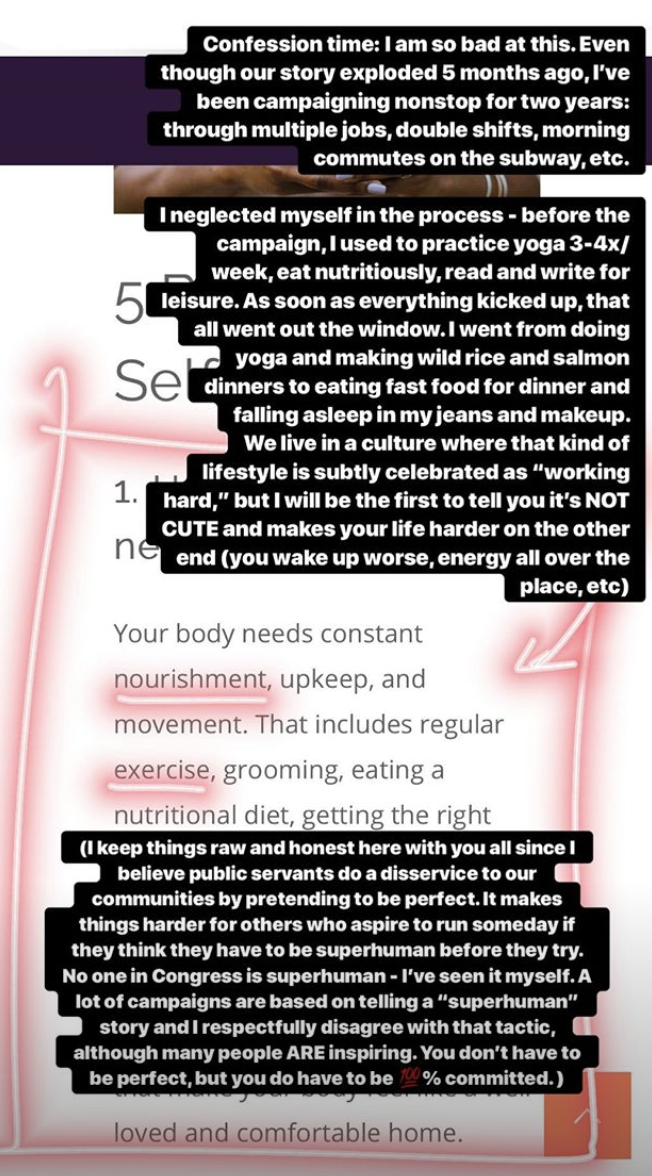 The congresswoman elect noted that self-care is especially hard for women, who are expected to give themselves fully and selflessly while men take time for themselves to enjoy their lives. The fact is we should all have that same time and space for ourselves—it’s critical to avoiding burnout.

On Instagram, she mentioned that for activists, self-care is especially important, pointing to this resource from Amnesty International that offers tips for organizers (and everyone else!), such as “spend time with the people you love,” and “eat healthy foods, exercise, and try and get enough sleep.” She asked her social media followers to share their tips, too, and they suggested that she meditate, break out into dance, get outside, and take an epsom salt bath.

Ocasio-Cortez wrapped up her Instagram Story by saying that she’s spending her week in the “middle of nowhere” in upstate New York, bringing with her pens, music, epsom salts, lavender oil, and more self-care essentials. If you have other recommendations for self-care, send her a note.