Alec Baldwin played “Box of Lies” with Jimmy Fallon, and pretty much nailed it

While the staff behind The Tonight Show is always creatively on their game, one of their biggest successes has to be “Box of Lies,” a game that actually originated from Jimmy Fallon’s Late Night days. This time around, Alec Baldwin joined him in “Box of Lies,” and proved that he’s an ideal contender for the game.

If you’ve never seen it before, here’s the brief summary — Fallon and his guest are separated by a wall. One of them looks inside a random box, which almost always contains a super strange object, and has to announce what that object is to their opponent. The opponent needs to figure out if they’re getting the truth, or being lied to.

If that sounds confusing, watching it all play out will make much more sense.

While it seems to take Baldwin a second or two to fully get the game, he quickly switches on the humor. It all seems to click once he locks eyes with his first box item — the swaddled, thick, gelatinous bear.

We also love the way that Fallon, who’s played this game countless times throughout the years, tries to throw Baldwin off on the weight of his boxes.

"If we don't get the Emmy this year, we've done something horribly wrong," Fallon stated after huffing and puffing over Box #4.

One of the best things about this game is the fact that it’s one of the most creative segments on television. Just think about it — have you ever witnessed a surgical glove filled with olives before? 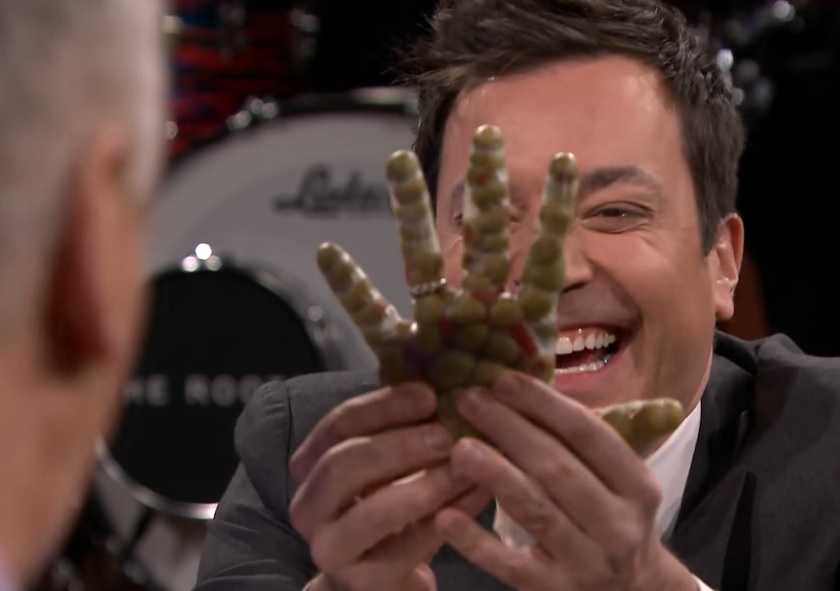 Probably not. But it’s so harmlessly funny — and that’s exactly the kind of stuff we need to see right now.

Also, why is the glove wearing a ring? Is it a subtle throwback to Fallon’s traumatic finger/ring incident of 2015? We might never know for sure.

Out of nowhere, Baldwin also busts out his Trump impression, which the audience absolutely loves. It adds so much to an already funny segment.

If you want the laughter to continue, watch Alec Baldwin host Saturday Night Live this weekend for the 17th time. It’s bound to be pretty legendary.