During a group Zoom call the other day, two of my friends happily bonded over how clear their skin has been recently, thanks to the fact that they haven’t been putting on makeup for work. I smiled as I listened, but I didn’t chime in—because while I, too, have been going foundation-free these past few weeks, myADHD symptoms have been flaring up, meaning I’ve been picking at my skin like nobody’s business.

As someone who wasn’t diagnosed with Attention Deficit Hyperactivity Disorder (ADHD) until age 25, despite displaying many of the telltale signs my whole life (i.e. poor concentration, uber-fast talking, a tendency to lose anything not nailed down…), I’ve only recently learned how to manage the condition. I take Adderall every workday, which helps both my focus and otherwise near-constant fidgeting; I’ve also come up with a number of useful tactics, like watching movies with closed captions to help me stay focused on the plot and actually putting my keys in the same place each night to avoid 10 minutes of searching in the morning. There’s no question that my issues still exist, but those changes, among others, have made my life significantly easier.

But since the coronavirus (COVID-19) pandemic began, I’ve noticed that my ADHD symptoms have gotten a lot worse.

I’m struggling to focus; trying (and failing) to keep track of my things; and compulsively picking at my skin, hair, nails, and lips because my hands can’t stay still. My medicine hasn’t worn off, as far as I know, and while I’m certainly stressed out about the world right now, my anxiety feels under control. So what’s the deal?

According to Dr. John Russell Ramsay, associate professor of clinical psychology at the University of Pennsylvania Perelman School of Medicine, it’s actually completely normal that people like myself are experiencing more ADHD-related issues than usual right now. Individuals with ADHD, he says, are “much more sensitive” than others to disruptions in their usual structure—so “a sudden and major overturn of one’s entire day,” like what’s happening right now during the pandemic, can take a major toll on their ability to function.

“This cognitive load has ripple effects on other issues relevant to ADHD, one being ‘working memory,’ or the ability to hold onto and adaptively work with information in one’s mind,” Dr. Ramsay explains. In other words, things like on-the-spot problem solving and prioritizing can be a little bit more difficult for those with ADHD—and “coordinating all of the online and spacial needs of everyone working and learning from home,” Dr. Ramsay says, is most definitely one of those affected issues. 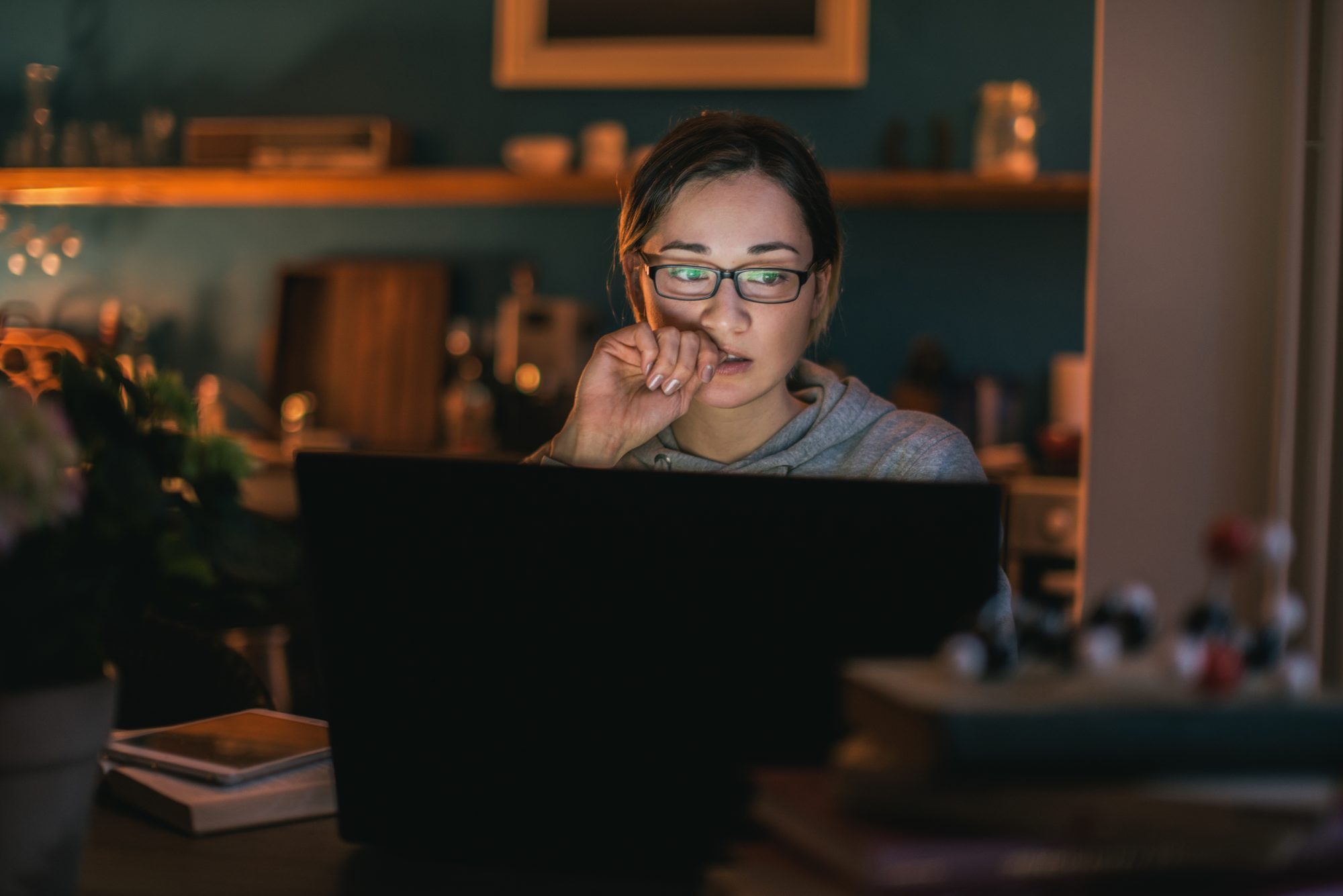 Indeed, when I was working in an office every day, I benefited from having a routine that helped me stay on task and focused. But I also had colleagues—and being surrounded by other people not only aided my concentration, but made me aware of how often I was doing compulsive behaviors like touching my face or biting my nails. So while I was able to keep those tics to a minimum while in the office, when I’m home—with only my boyfriend and pets around—I’m finding that my fidgeting is worse than ever. According to Dr. Ramsay, that’s probably due to the emotional impact of the coronavirus situation.

“These sorts of behaviors are often associated with and triggered by emotional discomfort, like dealing with uncertainty and boredom,” he explains. “You’re thinking, ‘I should be doing something,’ but are not able to get started or, perhaps, there truly is nothing to do at the moment, as many common social distractions are prohibited or unavailable.”

For ADHD fidgeters like myself, Dr. Ramsay suggests finding activities that keep our hands busy and promote mindfulness. Personally, I’ve found that puzzles have been a great tool for this. They also remind me to stay focused on one task at a time, which I definitely need right now; after all, for many people with ADHD, the most noticeable change since the pandemic began has been an increase in distractibility.

“I feel like I have to be on top of everything all the time—the distractions are constant, and there’s no way to stop them,” says Kathleen Walsh, a freelance writer. “I feel like I have to have CNN on at all times, and that’s always distracting, or I’m scrolling Twitter or Apple News… and then I wind up spending so much time pitching news stuff or trying to think of what’s happening that the stuff that I actually need to be writing gets pushed aside.”

If you, too, are struggling to focus—especially if it’s impacting your productivity at work—ADHD coach Dr. Gillian Hayes suggests breaking up your tasks into short, 15-minute periods during which you concentrate fully before taking a break, similar to the Pomodoro Technique. With a method like this, she explains, “it’s not that you have to be concentrated all the time,” just enough to get essential items done before letting your mind wander.

She also recommends asking a friend or co-worker to help keep you on track. “Find a colleague who will check in with you at the start of the hour and check in again after 15 minutes,” Dr. Hayes advises. If you don’t know who to ask, she notes that there are several ADHD support groups on Facebook that are filled with people who might be happy to help, especially if you return the favor. Dr. Ramsey adds that some national ADHD organizations, like CHADD and ADDA, are offering online webinars and other forms of group support.

Even if you don’t want someone checking in on you constantly, simply asking them to work (virtually) alongside you via Skype, FaceTime, or Zoom could be enough. “Have a window open where you can see and hear each other working,” says Dr. Hayes. “Sometimes it’s easier to work in the presence of another person. It’s like the other person anchors you, so you don’t feel as antsy as you’re sitting there trying to type.”

No matter what option you choose, it’s essential to form some sort of daily structure, even if it looks very different than what you had pre-pandemic. “Developing a flow or a routine for a day, including downtimes, is necessary to replace the typical scaffolding of one’s day,” says Dr. Ramsay. 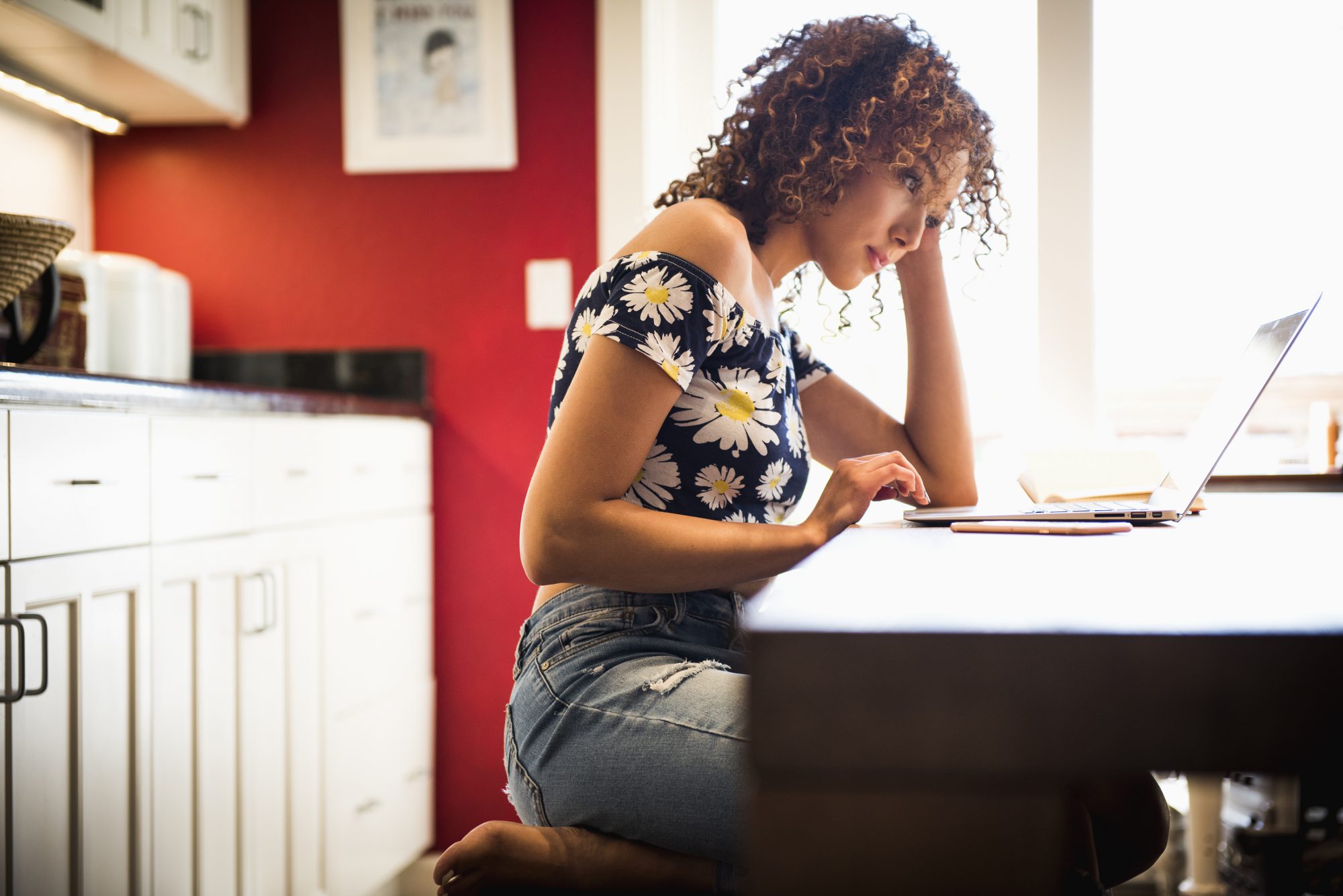 However, not everyone with ADHD is finding their symptoms worsening right now. For some people, social distancing has actually made managing their condition a bit easier. “I work from home normally anyway, and part of the reason I do that is because my house is the only place where I can really control my environment and I can do things at my own pace,” says Walsh. “So being sequestered actually makes me more productive.”

As someone who typically speaks, thinks, and moves at a million miles an hour, I’ve always found that I thrive in fast-paced environments; I get things done quickly and multi-task like I was born to do it. Yet in recent weeks, as I’ve been forced to slow down, I’ve realized that I actually feel substantially calmer than before. My fidgeting and distraction have increased, yes, but for once, I’m not racing to the next thing before I’ve even finished the first. I’m taking more time on each item and feeling more present in my life overall, moving at a pace that fits the limits of the world right now and that feels right for me naturally.

Dr. Hayes says this mindset makes perfect sense. “When we’re at work, we’re having to switch activities from one thing to another thing to another thing, and for a lot of people with ADHD, that takes a lot of energy,” she explains. At home, though, “we don’t have to do that. That time scale that we’re working on, the cadence in which we do things, is much more in tune with our natural time scale. So from that point of view, there’s a lot of people who are finally able to relax.”

Dr. Ramsay echoes this point. “Despite the many difficulties associated with ADHD, there are certain settings or circumstances in which individuals can function pretty well, if not remarkably well,” he explains, such as an environment where you can build your own sense of structure.

The lack of socialization options right now also is a surprising perk for some ADHD individuals. While not being able to hang out with friends or family is difficult for extroverts like myself, others consider it something of a relief. “A lot of the time, people with ADHD find that interacting in social situations is quite hard,” Dr. Hayes explains. “By the time [they’ve] figured out what [they] want to say, the conversation’s moved on. It can be stressful, and interacting with a lot of other people can take a lot out of [them].”

Whether you feel like your ADHD has you thriving right now or struggling just to make it through the day, there’s no “normal” way to be feeling during this unprecedented situation. What matters is that you’re caring for your condition properly through medication, (virtual) therapy, and/or support from others, and also that you’re cutting yourself a break if you are finding life to be harder than usual these days.