‘Broad City’ is finally back, and we’re wondering: Are you an Abbi or an Ilana? 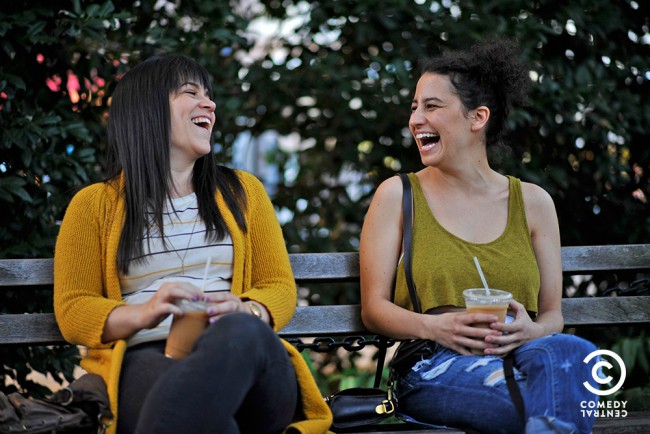 When Broad City’s Abbi and Ilana first donned their performance bibs and muttered their “Baa Baa Black Sheep” warm-ups, I’m sure you had the same thought as I did: That is so me and my best friend. Or maybe it was when they cleaned an apartment in their underwear to make a buck. Or split an “expensive” (read: $12.99) bottle of wine at a cheap BYOB.

We’ve all had our moment — but while Abbi and Ilana are unquestionably among the most relatable, borderline too close BFFs that ever graced television, one question does remain: Are you an Abbi, or are you an Ilana? (In my experience, everyone thinks they’re an Abbi — the slightly more responsible, rational one of the pair. Also in my experience, most are wrong.)

Wondering which Broad City broad is your Comedy Central doppelganger? Take out some paper and a pencil (or open the Notes app on your phone) and take this short quiz. And for more of your favorite BFF duo, catch the season 3 premiere of Broad City, Wednesday, February 17th on Comedy Central!

Do You Generally Care About Your Job?

Maybe you’re taking this quiz right now instead of doing the work you get paid to do. If this activity is one of the many non–related activities you’ve done so far today, 1 point. If you’ve exclusively indulged in weird internet fodder and haven’t even opened your work email today, 0 points. If you just woke up from a bathroom stall nap, take negative one point, you ballsy millennial you!

One of the most refreshing things about Broad City is that its stars are incredibly comfortable in their skin. They talk openly about their sex lives, make brazen fashion choices, and commit so hard that they’ll attempt parkour despite any apparent ability and scarf down clams, severe seafood allergy be darned. But there’s a stark difference between wearing a crop top to work and feigning a back flip off a car. If you care about what people think of you (maybe not all people, but at least your boss and your hot neighbor), award yourself one point. If you constantly have your hands in the air because you just do not care and/or have worn mint green lipstick, zero points.

Do You Like Your Friend Slightly More Than She Likes You?

Do You Have a Drunk Alter Ego?

Real talk: I totally thought I was the Abbi to my roommate’s Ilana. And then I discovered that Abbi goes into a fugue state and emerges as an old-timey cabaret singer and pool shark named Val. My BFF will slip into the exact same accent and drag me to a place brimming with foosball tables, where she’ll challenge everyone in the joint to just try to beat her at foos.

For this, I get zero points, and she gets 500. Score yourself how you see fit.

Is Your Hair Curly or Straight?

In case it wasn’t already abundantly clear, I haven’t really put a ton of thought into the math/consequences of this quiz (like I said, I realize more and more each day I am the Ilana of my friend situation). But you can probably figure out where you stand…

If your score is a positive integer and a kind-of high number, you are an Abbi. You’re bold, creative, and a great time. You can hold your own with a rowdy Kelly Ripa, but you could also spend a Saturday night home alone, delicately arranging colored pencils in Bed Bath & Beyond storage units.

If your score is insanely low and maybe even a negative integer, you are an Ilana. You throw care into the wind, generally shirk responsibility, but are a steadfast and almost creepily loyal friend.

If this quiz made zero sense to you, you are Garol. Girl, you’ve spent too much time on Brother Island. Catch up on Broad City stat.

Watch Broad City on Comedy Central, Wednesdays at 10/9c or anytime on the CC app!