A mustachioed Adam Scott told a story about how his son stole from Jimmy Kimmel, and it’s actually pretty adorable

The best way to differentiate yourself from your past character Ben Wyatt, former lead of the failed Ice Town project? Facial hair. Parks and Recreation alum Adam Scott rocked a mustache during Jimmy Kimmel Live last night, but that wasn’t all — he also had a pretty incredible story to share.

It seems like Scott and Kimmel are actually decently close outside of the studio. So close, in fact, that Kimmel invited Scott and his son, Graham, to a Super Bowl Party at his house last year.

As Scott sets up the story, one thing’s apparent — Kimmel knows how to throw a party. In fact, his house seems perfect for such an event. Kimmel even goes above and beyond to include a few tins of Altoids for his guests in the bathroom.

These Altoids are pretty much the center of the story, which you can hear in the video below.

It seems like Graham Scott, approximately nine years old at the time, had his first attempt at robbery during the party in question.

"He pulls out a tin of Altoids that he put into his jacket pocket. And I was just kinda like, aw man. Now I have to do the parent thing where you have to pretend this is a big deal, and say  'I hope Jimmy doesn't call the cops.' You have to make it seem like it's a huge deal," Scott said.

Scott decides to have Graham write the Kimmel family a letter of apology — which Jimmy Kimmel still has today. 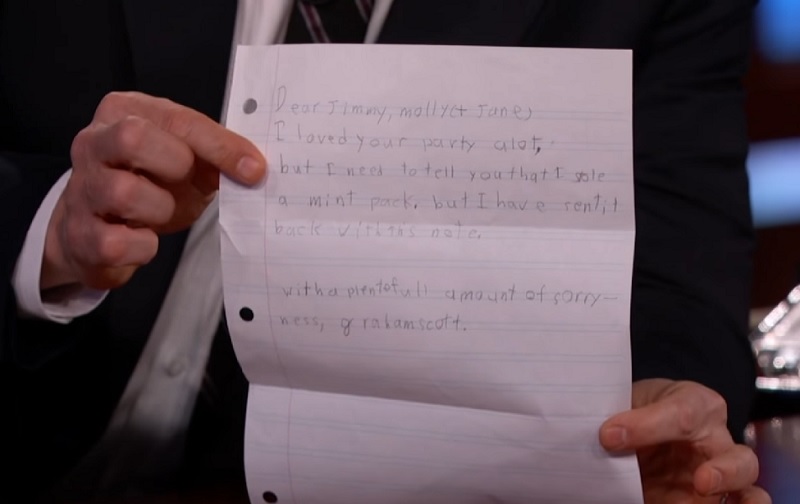 The note reads (with the typos included):

"Dear Jimmy, Molly + Jane. I loved your party alot, but I need to tell you that I stole a mint pack. but I have sent it back with this note. With a plentefull amount of sorry-ness, graham scott."

We think that “plentiful amount of sorriness” needs to be a line that everyone uses, to be honest.

Luckily, Kimmel one-upped the note by sending one to Graham the next day, with a pack of graham crackers. Clever, right?

We think this story is pretty sweet, and we totally approve of Adam Scott’s method of parenting. In fact, we’re sure that this year’s Super Bowl party will go off without any questionable mint thefts. Lesson learned.