There are few things as mortifying as being at work or out for the night and noticing that your sweat has turned malodorous. And if you’re a naturally sweaty person, summer can be particularly brutal for you — even while wearing tank tops and sundresses. The summer months offer no relief from the scorching temperatures, and if you live in many parts of the U.S., you spend June through August sweating more than you usually do. So how can you avoid sweat-related odor so you don’t feel like you’re reliving your adolescent years all over again every day for three months? We have some suggestions — some that are common sense and some that may be entirely new to you.

As NPR noted when it spotlighted Katherine Ashenburg’s book The Dirt on Clean: An Unsanitized History, the U.S. is notoriously anti-body odor and Americans are often obsessed with washing their bodies more than other cultures around the world. While we aren’t here to judge anyone who is less concerned with body odor, we totally get why people feel self-conscious about their sweat smelling — and if you feel that way, we want to help you put an end to any potentially unpleasant smell-related situations.

What’s fascinating is that it’s actually not your sweat that’s smelly.

As the Mayo Clinic explains, sweat is naturally odorless. The smell comes from is your sweat combining with the bacteria on your skin. Humans have two major types of sweat glands — eccrine glands and apocrine glands. The eccrine gland sweat is what develops when you’re hot since the gland secretes a fluid mostly made up of water and salt to cool your skin down. (Apocrine glands produce a more milky fluid that’s secreted when you’re stressed.)

But no matter what type of sweat your body is making, here are eight ways to avoid that sweat from smelling.

1Dry off completely after showering.

WebMD writes, “If your skin is dry, it’s harder for bacteria that cause body odor to breed on it,” so when you step out of the shower, pay attention to thoroughly dry off any parts of your body where you normally sweat a lot. While you might not think it matters in the moment, it will help in the long term.

Apple cider vinegar is often touted as a magical liquid, but it’s kind of true since one of the many things it can do is reduce body odor. Dr. Oz recommends splashing some of this miracle elixir on your armpits after you shower.  It’s supposed to lower the pH level of your skin, which helps reduce bacteria. Honestly, what can’t apple cider vinegar do?? 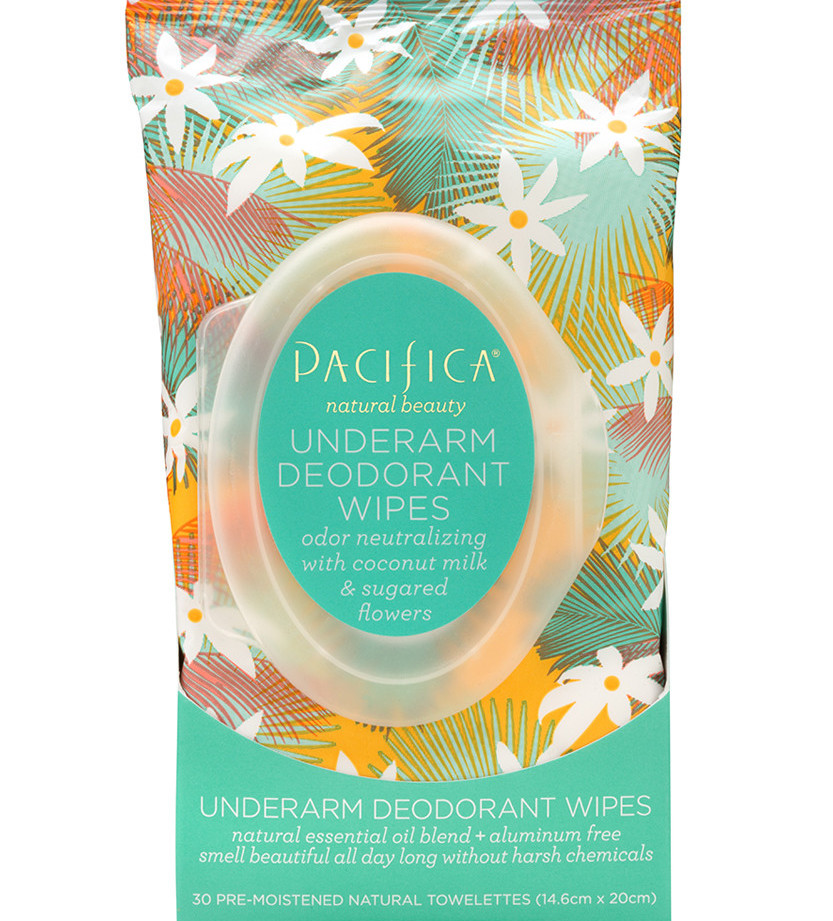 If you’re smelly during the day and can’t take a shower, reapplying deodorant will only do so much. Instead, get some underarm deodorant wipes to help wipe away the odor for a longer-lasting solution. This writer can personally attest to Pacifica’s line of deodorant underarm wipes that use natural ingredients. You still may want to put more deodorant on afterward, but you’ll feel fresher almost instantly.

4Use a clinical-strength antiperspirant.

While deodorants are what eliminate smell, antiperspirants are what stop you from sweating. As Dr. Elizabeth Tanzi told Health, “Antiperspirants work by plugging the top of the sweat gland with aluminum to reduce sweat at the surface of the skin.” While they don’t get rid of bacteria, if you aren’t sweating, you’ll smell a whole lot less. There are clinical strength antiperspirants out there that don’t require a prescription and can be applied at night to help eliminate sweat for up to days. Just be sure to read the directions thoroughly and be cautious if you have sensitive or dry skin. And you’ll still want to apply deodorant in the morning.

Next time you’re getting dressed on a hot day, check out the tags on your favorite clothes. Breathable fabrics will help you in your pursuit to sweat  — and smell — less. Stich Fix recommends trying to wear clothing made of natural fibers, like cotton (including chambray) and linen.

6Keep your body and clothes clean.

This one might seem obvious, but you may find that you need to bathe more in the summer to combat odor. Fox News Health noted that showers are better than baths for eliminating odors since the steady flow of water helps remove more bacteria from your body. And the use of antibacterial soap helps too. When it comes to the fabrics you put on your body, change your towels out frequently. And while in the winter you may be able to wear a sweater a few times without washing it, it’s not worth putting on any previously worn clothing that you already sweat in during the summer.

7Be aware that you really *are* what you eat.

It’s not just your breath that will smell when you eat stinky foods. Dr. Constantine George explained to Thrillist that as your body digests food, compounds are produced and released through your pores. “Let’s say you eat garlic, onions, and spicy foods that have odors. That can be a problem,” Dr. George said. So if you have a big date and you know you’ll be sweating, you may want to avoid particularly smelly foods, knowing that they will cause smelly bacteria to come out of your pores that will mix with your sweat.

8Put antiperspirant and deodorant on other places than just your armpits.

Armpits get a bad rap for being one of the grossest places on our bodies, but they aren’t the only part of human anatomy that gets sweaty — and thus, smelly. One writer for xoJane explained that she puts antiperspirant on places like her knee pits and feet — and under her boobs (so clutch) — to help stop the sweat.

Sweating is a natural — and essential part of life — so while we can’t put a stop to that, hopefully these tips will help make your sweat smell less this summer.

And next time you apply antiperspirant or deodorant, pay attention to how thoroughly you put it on (especially if you have armpit hair) and take comfort in the fact that we all go through this — especially in the summer.