Last night’s Season 6 finale of The Walking Dead, fittingly titled “Last Day on Earth,” was 90 minutes of television at its finest. If you didn’t watch last night, there are MAJOR SPOILERS ahead so turn back now while you still can!

The last few episodes have been building up to this moment, and AMC delivered in a big way. We got big inter-character development, everyone together again for what feels like the first time in forever (albeit not in a good way), and the biggie: our first look at Negan, perhaps the most notorious villain in the The Walking Dead universe.

So many things about this episode had us chewing our nails: Will Maggie get to a doctor in time? Did Daryl actually get his head shot off last episode? But there are a few moments that really stood out to render us that much more impatient for Season 7 to make its debut.

I can’t be the only one who thought Carol was a goner, especially with the whole “cross” symbolism throughout the entire episode – not to mention she has been going in a wayward direction for a while now over this latter half of the season. In fact, before the episode even started, I told my husband, “I think Carol’s gonna die” between my tears. Even she thought so.

But luckily, she’s safe for now, thanks to Morgan – who apparently learned it’s okay to kill someone when they’re threatening the life of someone he loves. I also can’t be the only one wondering if something deeper will blossom between Morgan and Carol, whom I didn’t realize I feel may belong together until he rode in on a literal white horse to take down her attacker.

2. And the guys who came out of nowhere to “help.”

Not going to lie, the best part of the entire aforementioned scene is when the two knight-esque guys who are apparently one horse short show up and offer Carol and Morgan a hand, if only for their ridiculous outfits. My husband literally turned to me and said, “Did they get lost on their way to the renaissance fair? Because I have some bad news for them.” 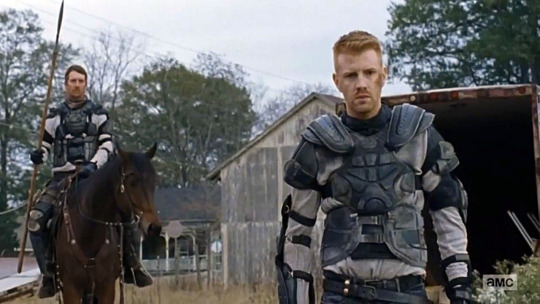 The real question: Are they Saviors? Or are they actually just random passersby looking for their horse?

3. The stepping up of both Eugene and Father Gabriel.

Who else mentally punched the air when Father Gabriel asked Rick if Rick trusts him to keep watch over Alexandria and Rick said he did? You go, Father Gabriel. I’ve personally been waiting for him to have his moment to shine, and he has earned Rick’s trust – and ours.

Another character who started off weak and has become one of the bravest? Eugene Porter, AKA Mr. Mullet. Sure, he has gotten the team into some messes, but between biting the hell out of Dwight’s junk and volunteering to drive the RV of Certain Death, Eugene has stepped up hardcore this season and earned the respect of everyone.

Plus, the bromance between him and Abraham = amazing. Eugenebraham 4lyfe.

4. The relationship blossoming between Abraham and Sasha.

Speaking of Abraham, at first, when he started pursuing Sasha and, in effect, left Rosita in the dirt, I was like GIRL RUN to Sasha. But the tender finale scene in the RV where Abraham is like, “Hey, maybe we can have that too” to Sasha in regards to Glenn and Maggie’s baby was sweet, as much as I kind of hate to admit it. But Rosita does seem to have moved on somewhat, and she can definitely do better. Everyone just deserves to be happy, dang it.

5. The first look at Negan.

I’m not sure what I expected out of Negan aside from the fact that I would undoubtedly feel an attraction since he’s played by Jeffrey Dean Morgan and, shocker, I was correct about that (and yes, I hate myself). But I definitely didn’t expect him to look like he just stepped out of a high-school production of Grease, which I sort of dig, as it gives him a vulnerability that makes his villainous behavior that much more difficult to stomach. Honestly, for me, it was hard to hate him right up until he swung Lucille. And even then I was like, “Well…did X person deserve it?”

Again, I hate myself.

6. The return of Rick’s crazy eyes.

There’s a certain thing that happens with Rick’s eyes when some shiz is about to go down. You guys know what I’m talking about: the look when someone threatens anyone he loves in any way or tries to beat him down into a position of submission where he can do nothing but listen.

Things have been hard for a while, but we haven’t seen the crazy eyes in quite some time. I, for one, can’t wait to see the final showdown between Rick and Negan.

Speaking of “final showdown,” hands up if you’re relieved the Lucille scene was shown from a point of view that garnered the least realism possible. ME TOO. I was pretty convinced I would not be able to watch one of the main characters get their heads bashed in with a barb-wire bat.

But who met their maker via Lucille? We know who it is in the graphic novels, but The Walking Dead TV show doesn’t exactly follow those scene for scene. We know it ISN’T Carl or Rick, considering what Negan says right before carrying out the task (“Anybody moves, anybody says anything, cut the boy’s other eye out and feed it to his father”). The rest is a bloody mystery.

Guess we’ll have to be patient for Season 7 to find out. It’s only five months away, guys. Just…five…months.